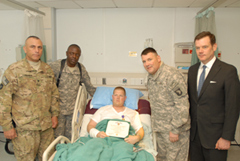 Sergeant Brian Pfeiler received the Purple Heart after being wounded in Afghanistan.

An Iowa National Guard soldier was badly wounded Thursday when he stepped on a land mine in eastern Afghanistan. Guard spokesman Colonel Greg Hapgood says Sergeant Brian Pfeiler was with other Iowa soldiers on a routine combat patrol.

“From the information we’ve received, the injury was to one of his legs and he’s lost the lower portion of one of those legs,” Hapgood told Radio Iowa.

Sergeant Pfeiler is an assistant squad leader with Company D, 1st Battalion, 133rd Infantry based in Dubuque. The 27-year-old is a native of Earlville in northeast Iowa’s Delaware County. The incident occurred around noon Afghanistan time.

Hapgood says Sergeant Elijah Wright, a medic from Janesville, rendered lifesaving aid to Pfeiler before he was flown by helicopter to a medical facility. Stepping on a land mine is just one of many potential dangers facing U.S. troops in Afghanistan.

“Certainly, it’s difficult to detect all of the explosives that are in place in Afghanistan. There are many instances of finding these kind of objects before they do anybody harm,” Hapgood said. “But, in this particular case, it was just simply undetected and with great misfortune, Sergeant Pfeiler happened to step on this buried mine during the course of this patrol.”

Pfeiler was presented with the Purple Heart today at a hospital at Bagram Airfield in Afghanistan. He’ll eventually be transferred to a medical facility in Germany. “His injury is serious and it’s going to take a considerable amount of time for additional surgery and rehabilitation. It could be several months before he arrives back in Iowa,” Hapgood said.