You are here: Home / Sports / Paddy O’Prado a finalist for the Eclipse Award 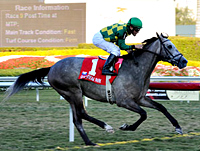 A horse owned by a group that includes nine Iowans is a finalist for an Eclipse Award. Des Moines attorney Jerry Crawford, who bought Paddy O’Prado and formed Donegal Racing, learned this week his horse was one of three up for award.

“This is the most prestigious award in all of horse racing and it means that he has been named one of the three best three-year-old horses in racing today,” Crawford said.

“We’re not the kind of partnership that goes and spends millions of dollars on a horse,” Crawford said. “What we try and do is find the hidden gems that represent a value and certainly (Paddy O’Prado) has…and we’ve really only scratched the surface because his value as a stallion, once he retires from racing, will just be extraordinary.”

The winners of Eclipse Awards will be announced on January 17 in Miami Beach. Crawford says Iowans can expect even bigger things from Paddy O’Prado as a four-year-old in 2011. “It is truly a blessing to be associated with a horse like this and to have the honor of helping guide his career,” Crawford said. “And I’m just as happy for all of the Iowans who adopted Paddy as their own horse as I am for the partners in Donegal Racing. It’s been a real source of pride for the whole state.”

Paddy O’Prado’s first big race of 2011 is scheduled for May 7 – the 137th running of the Kentucky Derby.