You are here: Home / Crime / Courts / Democrat issues “word of warning” to GOP 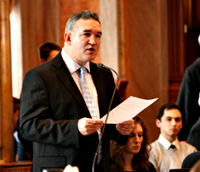 A key Democratic leader issued a not-so-subtle message to Republicans on the opening day of the 2011 legislative session.

Republicans have a 20-seat advantage in the Iowa House and control the debate agenda, but House Democratic Leader Kevin McCarthy warned the G.O.P. last week that Democrats would “shut the place down” if they pursue impeachment against the four justices who remain on the Iowa Supreme Court.

“A word of warning, however,” McCarthy said. “If a day comes when our members show up ready to work on bread and butter issues and instead find that the house ship has steered into stormy waters, focused instead on divisive issues, then you will hear our voices as we attempt to steer that ship away from the extreme and back to the mainstream,” McCarthy said.

House Speaker Kraig Paulsen, a Republican from Hiawatha, told reporters early this afternoon that impeachment is not currently on his agenda. “I don’t believe one of the messages out of the election was, speaking for the electorate: ‘We fired these three.  We expect you to fire the other four,'” Paulsen said. “We’re taking input from Iowans now. If we’ve miscalculated that, then they have an opportunity to talk to us.”

Senate President Jack Kibbie, a Democrat from Emmetsburg, said while a few issues may result in stalemate, the legislature will be able to act on most items.

“I know that we all face many challenges with divided government.  It will require us to work more closely together and find common ground,” Kibbie said.  “Contrary to what many think, we are not gridlocked, nor will (we) be. We have faced these divisions before and Iowans expect us to work on their behalf.”

McCarthy, too, suggested total gridlock can be avoided. “We will have some battles at times, no doubt, but I am confident that no matter what that battle may be on any given day that we will be able to get together at the end of that particular day and talk in a civil tone about the next day and how we will, again, work together in a bipartisan way,” McCarthy said late Monday morning during a speech on the House floor.

Listen to all the speeches legislative leaders made this morning at the statehouse.