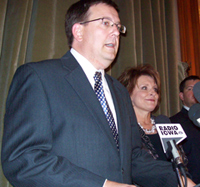 The 2011 Iowa legislative session begins today with Republicans in control of the Iowa House following the November election and a Republican soon to take over as governor.  Democrats retain a narrow majority in the Iowa Senate.

House Republican Leader Linda Upmeyer says today will be full of tradition and ceremony. “But you know, it’s really important to do that. We have new members coming that are being sworn in for the very first time,” Upmeyer says. “And I always think back to my first swearing in.”

Upmeyer is the daughter of the late Del Stromer, a former speaker of the Iowa House. Upmeyer was elected to the Iowa House in November of 2002 and then her retired parents went south for the winter. But when the opening day of the 2003 legislative session drew near, her parents changed their plans.

“They decided, ‘Wow.  This swearing in, this is a big deal’ and they drove all the way back from Texas to watch me being sworn in,” Upmeyer says. “It is an important thing that people are doing and we need to recognize that and so we will give it our full attention and give all our families and all the people who supported these newly-elected officials an opportunity to celebrate that.”

The first bill scheduled for debate in the Iowa House will make cuts in the current year’s state budget.

“Our challenges are going to be to do precisely what we said we would do during our campaigns,” Upmeyer says. “Iowans sent us to Des Moines to spend less, save more and put Iowans back to work, in addition, give Iowans a chance to vote on the definition of marriage and those are the things we’re going to focus on first.”

On Wednesday, Mark Cady — the interim chief justice of the Iowa Supreme Court — will deliver the annual “Condition of the Judiciary” address. Cady is the justice who authored the court’s 2009 ruling on gay marriage that is still being debated in Iowa political circles.

On Tuesday, Governor Chet Culver will deliver the annual “Condition of the State” message — likely to be his final official act as governor.

On Friday, Governor-elect Terry Branstad and his running mate, Kim Reynolds, will be take their oaths of office in a ceremony to be staged at Hy-Vee Hall in downtown Des Moines.