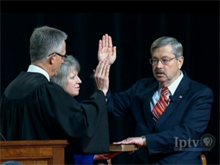 Governor Terry Branstad called his 2010 campaign “the experience of a lifetime” and he offered a “new covenant” for Iowa as he took office for a fifth term today.

Branstad delivered his Inaugural Address to a crowd gathered in Hy-Vee Hall in downtown Des Moines, addressing the central themes of his successful campaign for a fifth term as governor.

“To those who say that our goals of 200,000 new jobs and 25 percent increase in family incomes are too high, I say, ‘You ain’t seen nothing yet,'” Branstad said.

Branstad pledged to remove the “yoke” of excessive government from Iowans so the state can reach its full potential.

“It is time for a new covenant between Iowans and their government,” he said. “It is a covenant that is founded upon principles of limited government, service above self, transparency and integrity, world class schools and celebrating the success of Iowans.”

Branstad said to be a good steward of the state, he needed the help of all Iowans, not just his fellow Republicans. “No one of us has all the answers,” Branstad said. “But together, we cannot fail.”

Branstad suggested righting the ship of state would position the state’s economy for growth.  “Iowa stands at the precipice of opportunity greater than at any time since our ancestors crossed the Mississippi to view an expanse of prairie as far as the eye could see,” Branstad said. “With the advent of open markets, a growing world middle class, and a need for sustainable solutions to the world’s problems, Iowa sits in the catbird seat of history.”

As Branstad had hinted he’d do, he issued a call to Iowans, to “seize the day” and serve others.

“Let us all renew our commitment to get involved:  help the homeless, feed the hungry, minister to the sick, pray for the wayward; to make each of our communities better by stepping up and stepping out,” Branstad said. “And to those who are most fortunate, we bear a special responsibility to extend the ladder of opportunity to those in need.”

While Branstad’s speech fit the ceremony of the occasion, he did touch on a couple of specific policy proposals, like cutting the corporate tax and commercial property taxes.  He promised both income and property taxes would be “reduced and simplified” — and the crowd stood to applaud.

“The job creators will be rewarded,” Branstad said. “They are welcome here and it is about time our tax system reflects that fact.”

Branstad also pledged to host an “education summit” and he called for installing a merit-based system for teachers. “But it is not just schools that must do more.  Teaching children the value of a good education is the job of parents.  Instilling the importance of lifelong learning not just by words but by example will help families and Iowa prosper,” Branstad said. “It is time for all of us to get involved.”

Branstad’s running mate, Lieutenant Governor Kim Reynolds, spoke before Branstad, after she took the oath of office.  Reynolds also stressed the value of working with all Iowans to find solutions to the state’s most vexing problems.

“Because no person, no party, no pundit has a monopoly on good ideas,” she said.

Unlike Branstad, Reynolds spent time in her speech specifically thanking and praising individual members of her family and she paid tribute to her late mother-in-law who died in December.

The text of both speeches is here, along with a live blog of the event.