You are here: Home / Politics / Govt / Branstad: “Am I really doing this again?” 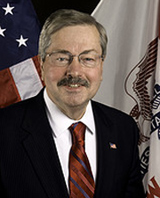 “Sometimes I have to kind of pinch myself: ‘Am I really doing this again?'” Branstad joked during an interview with Radio Iowa. “But it’s going to happen. I know that.”

Branstad, a Republican, left office in January of 1999 after serving 16 years as governor.  In October of 2009, Branstad retired from his job as president of Des Moines University, the state’s largest medical school, and launched what he called a “comeback” bid for governor.

“I hope that I’ll make fewer mistakes and be more effective in getting things done than before,” Branstad said late last week.  “But, you know, life is a learning experience and every day you try to learn something and, hopefully, apply what you’ve learned to be able to do a better job this time around.”

Branstad is scheduled to take the oath of office at about 10:15 this morning. Branstad told a group of reporters and editors last week his wife, Chris, has urged him not to give a long, boring speech.  Branstad intends to use his Inaugural Address to encourage Iowans to embrace the spirit of service.

“Probably the most memorable thing I ever remember from any inauguration was from (President) John Kennedy’s speech.  It’ll be about the 50th anniversary of that.  It was 1961 when he said, ‘Ask not what the country can do for you, but what you can do for the country,'” Branstad said last week during an appearance at a forum organized by the Iowa Broadcasters Association and the Iowa Newspaper Association.

When Branstad became Iowa’s 39th governor in January of 1983, he was the youngest governor in the country.  Branstad is now 64 years old. Today’s inaugural ceremony will be held at Hy-Vee Hall in downtown Des Moines.  That’s the site of tonight’s black-tie-optional Inaugural Ball, too.