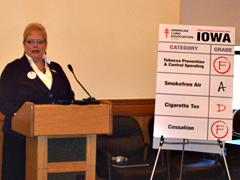 Micki Sandquist, executive director of the American Lung Association of Iowa, says smoking is a nearly two-billion dollar drag on the state’s economy.

“While the retail price of a pack of cigarettes in Iowa is, on the average, $5.54, the combined medical costs and productivity losses due to each pack sold are approximately $18.83 per pack,” she says.

“When they come in and I have 15 minutes to see them, I don’t have the time, always, to help them form a plan or figure out how they’re going to quit. I’ll talk to them about the medications that are available. I’ll give them some general direction on what they can do to help quit, but what’s really helped us in the health care industry is Quitline,” Mein says. “We know it is effective. We know it’s beneficial. It does everything that we don’t have the time to do.”

The state-run Quitline has provided prescription medications like Chantix to smokers trying to quit and Mein says that’s crucial for the low-income patients who can’t afford the 150-dollars for a month’s supply of that drug. “There is a huge difference between asking somebody to go out and pay $4.50 or $5 a day for a pack of cigarettes than saying, ‘OK, you need to go the pharmacy right now and drop $150,” Mein says.

The Republicans’ budget bill must now go before the Democratically-led Senate.