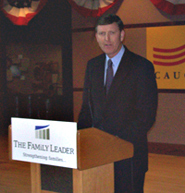 Three potential Republican presidential candidates have agreed to speak at forums organized by The FAMiLY Leader, an organization led by the chairman of last fall’s successful effort to vote three Iowa Supreme Court justices off the court.

“We think this gives our base of support a real opportunity to be educated with some real national leaders on pro-family policy,” Vander Plaats said.

Each of those three potential candidate — over the course of a single day — has agreed to speak at Dordt College in Sioux Center in the morning; make a midday stop at Pella Christian High School and wind up at the University of Iowa in Iowa City late in the day.

“At each location…the lecture and question-and-answer series will be videotaped and we plan on blasting that message to our some 50,000 email database constituents so they get an opportunity, if they cannot attend, to see these public figures with their pro-family vision,” Vander Plaats said.

Pawlenty has agreed to appear on February 7.  Bachmann will do the three-stop tour on April 11 and Santorum’s scheduled for May 2.  Vander Plaats said his group intends to have one forum a month, through perhaps October.

Two other potential presidential candidates — former House Speaker Newt Gingrich and former Godfather’s Pizza C.E.O. Herman Cain — have agreed to do participate in the lecture series, but a date hasn’t been set yet for their appearances.

Listen to the news conference: FAMiLYLeaderForums