Two Iowa governors were on hand for a statehouse ceremony designed to promote the “Live Healthy, Iowa” program so more state employees will participate. Former Governor Robert Ray is the brainchild of what used to be called, “Lighten Up, Iowa” — a 100-day-long, team-based weight-loss initiative begun nine years ago.

The name’s been changed, with teams now encouraged to log their exercise as well as their weight loss. Governor Terry Branstad, who lost 14 pounds over the past couple of years, is asking nine other members of his staff to join him on a team.

“I’d like to lose probably another 10 or 12 (pounds),” Branstad told reporters. Branstad says he eats a lot of salmon, vegetables and fruit, and tries to exercise regularly. “I come from a family that has issues with diabetes and heart disease, so it’s critically important, I think,” Brantad told reporters.

“It’s important for everybody, but if you have the kind of a history in your family, it’s even more important.” Branstad had a heart attack in 2000 and this past May during a routine exam his doctors discovered a partially-blocked artery, so surgeons inserted a stent.

Former Governor Ray attended this morning’s event, but did not speak. 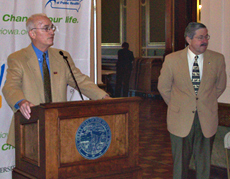