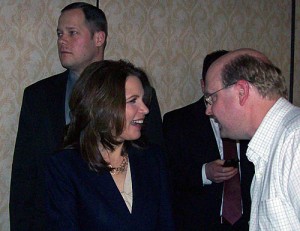 Minnesota Congresswoman Michele Bachmann was the headliner for an “Iowans for Tax Relief” event this evening, warning that the country faces grim choices about the national debt and dancing around questions about her own political aspirations.

Bachmann began by talking about her Iowa roots, calling herself “an Iowegian” since she was born in Waterloo.

“I know that there’s been a lot of speculation, though, about why I’m coming here to Iowa today and I don’t want to keep you in suspense for one more minute because it is with pride in my heart that I am here to announce here in Iowa,” Bachmann said, pausing for effect before adding, “that it’s really good to be home.”

Bachmann said the country needed a “bold, strong, constitutional conservative” to replace Democrat Barack Obama as president and she said Iowans will set the course for the 2012 presidential race because of the first-in-the-nation Caucuses.

“You will be the ones to decide and that’s why I’m so excited because I feel like I know you because I was born here.  I was raised here. These are my values,” Bachmann said. “I feel like we understand each other and I trust you with that decision.”

Bachmann criticized the health care reform law, the federal bailouts for the financial services and auto industries and government regulation of light bulbs. “This is stunning — stunning what has occurred in just two year’s time but remember we are Americans,” she said. “Remember who we descend from. Remember the greatness that belongs to all of you because you are that self-correcting power.”

Bachmann warned the country’s future is in “grave doubt” because of the national debt and the “entitlement mentality” of too many Americans.

Steve Scheffler of the Iowa Christian Alliance attended tonight’s event.  Scheffler, who is one of the Republican Party of Iowa’s representatives on the Republican National Committee, said Bachmann should run for president. “She brings a lot to the table, going to address a lot of issues, so I think she’ll energize the base,” Scheffler said. “I think she ought to join the fray.”

Jon Wood of Adel went to high school with Bachmann and he attended tonight’s event to get a glimpse of his classmate. “I just remember her from high school being a very decent person, you know what I mean?” Wood said during an interview with Radio Iowa. “Just kind of regular — not part of that clique that’s sort of stand-offish, kind of the snobby clique — just an every day person.”

Wood describes himself as a Ron Paul/Tea Party person and he’s evaluating Bachmann as a potential presidential candidate. “She talks about fiscal responsibility and that’s really the main thing, so if she continues that, that sounds great to me,” Wood said.