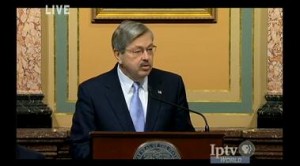 Governor Branstad has formally presented his state budget plan to legislators today and it calls for a significant increase in the state tax on casinos as well as $360 million in state budget cuts.

“It will not be easy.  It will require difficult and painful choices,” Branstad said during a formal address to lawmakers. “But the pain we endure by fixing our budget today will lead to great opportunities for Iowa in the future.”

Branstad is asking legislators to approve a double-digit increase in the state tax on casino profits, raising the tax rate to 36 percent.   “A restoration of the gaming tax to the level at which it was originally agreed to years ago,” Brantad said during his speech.

Branstad signed the bills legalizing gambling at both race tracks and casinos during his previous 16-year run as governor. A court case challenged the state taxes on casinos and race tracks, which used to be at different rates. Under current law the state’s two largest casinos pay a 24 percent tax while the others pay 22 percent.

Representative Tom Sands, a Republican from Columbus Junction, is chairman of the House Ways and Means Committee, the panel that will consider Branstad’s casino tax hike.

“To be perfectly honest, this morning was the first I had heard of that, so it caught me just a little bit off guard,” Sands says. “We’ll take a look at it, but none of us in the House Republican Caucus ran on a tax increase, so we’ll take an honest look at it, but it’s not on our radar.”

Senate President Jack Kibbie, a Democrat, is from Emmetsburg, home to one of the state-licensed casinos.

“I doubt if we’ll do that. We’ve got a pretty high tax already at 22 percent,” Kibbie says. “…The governor said, ‘No tax increases earlier,’ but now we’re raising taxes so it’s a new day, I guess.”

“Terry Branstad always campaigns on, ‘Gee, we’re going to get the budget under control and no new taxes,’ and so here he’s got a $200 million tax increase,” Gronstal says. “So I guess, one more time, Iowans have found out what he says on the campaign trail doesn’t mesh with what he does when he gets to office.”

Branstad’s state budget plan covers the next two years, and he would not provide a state aide increase to K-through-12 public schools in either year.  Branstad did set aside about $43 million to provide subsidies for parents who find it difficult to afford preschool tuition.

Branstad began his speech to legislators with what he said was a “stern talking to” about the importance of fiscal discipline.

“It is our responsibility, as servant-leaders, to pass a budget as honest, frugal and balanced as the people it serves,” Branstad said. “And, the time is now to do it.”

Gronstal, the Democratic leader in the state senate, says Democrats won’t go along with Branstad’s cuts to preschool or his call to freeze general state aid to schools for the next two years at the present year’s level.

“We need a stern talking to to the governor about the importance of early childhood education to our future workforce,” Gronstal told reporters after Branstad’s speech.

Branstad’s top budget advisor says state agencies will be “under real stress” as most would see a budget cut of between five and eight percent.  Branstad told legislators his budget plan “cleans the cobwebs” out of state government.

Legislators will spend the next few months drafting their own state budget plan.  Representative Scott Raecker, a Republican from Urbandale, is chairman of the House Appropriations Committee.

“I think the governor has laid out an intellectually honest budget that doesn’t spend more than it takes in, provides tax relief as he has indicated and he’s shown us how he’s going to do that,” Raecker says. “We’ll have to work through the details.”

Branstad is asking legislators to immediately provide another $40 million for the current year’s state budget.  That would off-set about half of the $84 million in cuts Governor Culver ordered in his last week in office.  It means layoffs at the state prisons and the state-run Mental Health Institutes would be averted if legislators approve Branstad’s revisions for the current year’s budget.

Read more about the speech and Branstad’s proposals on this live blog of Brantad’s formal address to legislators.