You are here: Home / Politics / Govt / New group aims to use Iowa Caucuses as “lever” to “move the world” (audio) 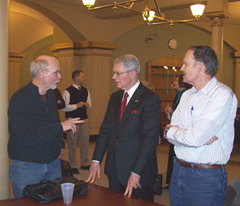 A retired business consultant is investing his time and his own money in a project to pursuade presidential candidates to embrace a program he says can significantly reduce the federal deficit.

Seventy-one-year-old Michael George, founder of Strong America Now, has hired five staffers to fan out through Iowa to build a network beyond the 10,000 Iowans who’ve already signed up.  \”Iowa is the lever by which you can move the world,” George said during a news conference in the Iowa Capitol.  “Barack Obama proved it in 2008. We think we can prove it again in 2012.”

George wants Iowans to convince the 2012 candidates to embrace a process that would see each federal government agency cut seven percent out of its budget in each of the next four years.

“What we need is a method of spending reduction that everyone can agree on — Democrats, Republicans, Libertarians, pro-life, pro-choice, everyone — and that method is called waste reduction,” George said. “There is no constituency in congress for waste, is there?”

Matt Strawn, the chairman of the Iowa Republican Party, is backing the concept.

“There’s a proven road map for success that if we apply across the entire federal government, the operations, we can save up to $700 billion a year,” Strawn said during today’s news conference, “and put this country back on the path to a true balanced budget.”

George touts his previous work for the U.S. military, saying he helped the Navy save nearly $170 million a year by reducing the number of times pilots landed on aircraft carriers as part of their ongoing training.

Dave Funk, a Tea Party activist who was recently elected vice chairman of the Polk County Republican Party, is also part of the “Strong America Now” campaign. “And I’m asking every Iowan to look those presidential candidates in the eye and ask them, ‘What sir, what ma’am are you willing to do to save America?'” Funk said during this afternoon’s news conference.  “‘Are you willing to reduce the waste in government?'”

The “Strong America Now” organization does not plan to endorse candidates, but has already begun to spend money on radio advertising in five states to tout its call for significant “waste reduction” in the federal budget.