You are here: Home / Politics / Govt / Bill about religious objections to gay marriage tabled, for now 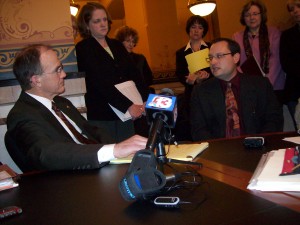 A bill that would have allowed Iowans to fire or refuse business services to people involved in a homosexual relationship has been tabled, but backers hope to craft another bill that would allow Iowans with “sincere” religious objections to refuse to do business with gays and lesbians.

Danny Carroll of The Family Leader, an organization that used to be known as the Iowa Family Policy Center, was among those who spoke this afternoon at a statehouse meeting on the proposal.

“There is no more basic and fundamental freedom than the right of conscience and religion and religious expression,” Carroll said. “For families and particularly family businesses, many of whom support The Family Leader, the freedom to conduct their private affairs consistent with their religious convictions is an American tradition that goes back centuries.”

Tom Chapman of the Iowa Catholic Conference asked legislators to consider several new legal restrictions, including one that would ensure Catholic Charities is not required to place adopted children with a gay or lesbian couple, with a single parent or with a man and a woman who are not married. “That’s an issue that we’d like to have considered,” Chapman said, “also have consideration of curriculum in schools.  Catholic schools are all accredited by the state and so we’d like to present our teachings in that way.”

“Jews certainly have a long history of being persecuted as a minority people and having laws legislated against us because of who we are, not necessarily what we believe,” Kaufman said. “I don’t that that’s the direction Iowa wants to go. I don’t think anybody wants to go in that direction.”

Rabbi Steven Edelman-Blank of the Tifereth Israel Synagogue in Des Moines suggested the bill would open up a “Pandora’s Box” of discrimination.

“The Biblical verse says that a man shall not lie with a man, like a woman,” Edelman-Blank said. “But I don’t see any legislation in the Bible that says, ‘One shall not serve someone a hamburger’…or ‘Someone should not give someone housing because of that,’ or ‘Someone should be fired from their job.”

Alicia Claypool of the Iowa Civil Rights Commission warned legislators the bill would “undermine” legal protections for all minorities.

“It’s like driving a Mack Truck through the Civil Rights law,” Claypool said.

Representative Richard Anderson, a Republican from Clarinda, told the 75 people who’d gathered for Wednesday’s hearing that the bill was being tabled.

“This bill is important to some Iowans and I have some issues, as do other people, with this bill,” Anderson said. “There is no intent to move it forward.”

But Anderson later told reporters there may be an attempt to draft a narrower bill to give Iowans some legal means of refusing to employ or do business with homosexuals.\

“We don’t know,” Anderson said. “There are issues that people have and we just have to continue to work on it.”

(This story was updated at 9:26 p.m. after the Catholic Conference clarified its policy proposal regarding adoption.)