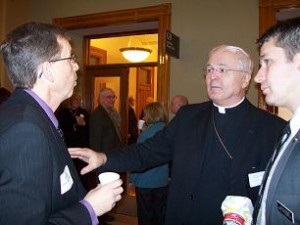 Iowa’s four Catholic bishops are at the statehouse today, urging legislators to pass a bill that would ban nearly all abortions after the 20th week of pregnancy.

Some key lawmakers are opposing the bill because it doesn’t ban all abortions, and their opposition dooms the bill. Sioux City Bishop R. Walker Nickless says that’s unfortunate.

“The goal is to end abortion, absolutely, but this is one step along the way,” Nickless says. “And I just feel sorry for people who just feel that it’s just got to be all or nothing and then they miss the opportunity to do a little bit.  Think of the abortions that are happening because they won’t take that one step, where we could eliminate some of those.”

Davenport Bishop Martin Amos agrees the bill moves state law governing abortions in a positive direction.  “Obviously we would like to see it go all the way, you know, from the moment of conception,” Amos says. “But from my vantage point, even if it’s a baby step, it’s a step.”

A Nebraska doctor has said he plans to open a clinic in Council Bluffs where he would perform so-called late term abortions. Richard Pates is the bishop for the Des Moines Diocese, which covers Council Bluffs. “Council Bluffs people have been very strong in saying that they don’t want that,” Pates says.

Dubuque Archbishop Jerome Hanus says he doesn’t explicitly tell legislators how to vote, but the Iowa Catholic Conference is registered as supporting the bill that would ban abortions after the 20th week of pregnancy, unless the mother’s life or health were at risk.

“We don’t want late-term abortions,” Hanus says. “That’s quite clear that this is a human being and it would be tragic not to save these lives.”

The bishops are also urging senators to take up a resolution which passed the House, a resolution that eventually would allow Iowans to vote on a constitutional amendment that would ban gay marriages, civil unions and domestic partnerships. Nickless, the bishop in Sioux City, says the institution of marriage must be preserved.

“The Catholic Church, especially, is not in any way discriminating against people who have a same-sex attraction. We’re trying to defend and promote what marriage is and the definition of marriage really can’t be changed.  You know, it’s something that preceded any of us and we’ve just got to preserve and protect that because it’s the foundation of society,” Nickless says. “And that’s what’s really trying to occur here is that they’re trying to redefine something that we really shouldn’t be doing at all.”

The archbishop says it’s important to affirm what marriage is and the fact that the proposed statewide vote has stalled again this year is puzzling to him.

“I don’t understand all the intricacies of legislation here,” Hanus says. “The people of the state have a right to express themselves on this.”

There are four Catholic dioceses in Iowa, based in Dubuque, Davenport, Des Moines and Sioux City.  According to the Iowa Catholic Conference, there are nearly half a million Catholics in Iowa.