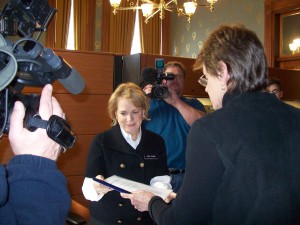 The group “Justice, Not Politics” presented the top Republican in the legislature with the signatures of 3200 Iowans urging the G.O.P. to abandon the idea of impeaching the four justices who remain on the Iowa Supreme Court.

Former Lieutenant Governor Sally Pedersen, a leader of the “Justice, Not Politics” group, says people from “all walks of life” and both major political parties signed onto the petition.

“Just people who believe that it’s a waste of time to be talking about impeachment,” Pedersen says, “that that’s not an appropriate action to be considering and are really making their wishes known that we should stop that conversation.”

Janece Valentine, a lawyer from Fort Dodge, was in Des Moines on other business, but made a side trip to the statehouse to help deliver the petitions.

“I feel extremely strong about the court system that we have here in Iowa,” Valentine told reporters. “We’re very blessed to have a very fair and impartial court and if we lose that, it hurts business. It hurts individuals. It hurts everyone in the state of Iowa.”

Last fall Iowa voters tossed three justices off the Iowa Supreme Court. Three rookie House Republicans who object to the court’s 2009 ruling on gay marriage have said they’re drafting articles of impeachment for the other four justices who remain on the court.