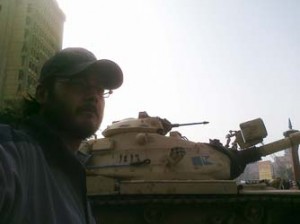 A University of Iowa student on a “study abroad” program in Egypt is safely back in Iowa now and says he’s lucky to be alive. Tens of thousands of protesters are rallying in Egypt, now in their 18th day of demanding that nation’s president step down.

Dan Olinghouse, a 25-year-old political science student at the U-of-I, says it was terrifying to be in the center of such turmoil and rioting.

“They were taking people and dropping them off in the desert with no I-D, no money, no phone…nothing,” he says. Olinghouse, who’s from the Des Moines suburb of Ankeny, used his cell phone to snap pictures and shoot video of the violence, even though he knew it was risky.

“A lot of people thought I was a reporter,” Olinghouse says. “That made it doubly dangerous for me because I was moving through the crowd a lot.” He says he feels fortunate to be back on American soil, especially having had large explosions go off very nearby.

“It turned into chaos really fast,” he said. “I don’t feel like any less of a man to say that I was scared when people were firing automatic weapons outside my apartment or when I got attacked by five police officers.”

When the violence became even more intense, Olinghouse says he planned his escape.

“I stood on my balcony with my bag and my suitcase ready to go and I watched until there was a lull so I could run out,” he said. Then, he flagged down a cab and finally made it to the airport.

Although his adventure has ended, he plans to keep in touch with his friends back in Egypt and monitor as much as he can from his computer. He will resume classes at the U-of-I next week, but would like to return to Egypt someday.

Olinghouse plans to combine all of the video and pictures he shot into a film to help educate others about the history he witnessed.