You are here: Home / Health / Medicine / King: no time for timidity; GOP should confront Obama 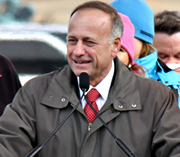 Congressman Steve King says his fellow Republicans in the House need to be more aggressive in seeking budget cuts that President Obama and the Democrats who control the U.S. Senate oppose.

“If we aren’t willing to challenge the president, then the president and/or Harry Reid (the Democratic leader in the U.S. Senate) will get everything that they’re willing to fight for,” King says. “And I’m making the case that if we’re not willing to let’s just say have a confrontation with the president, we might as well just ask him to write all the legislation that matters to him and put it all in one and pass it.”

King faults his own House GOP  leadership for failing to include language in a major budget bill that would cut off spending to implement the new federal health care reform law.

“We’re not getting a vote on it and I’m not very happy about that especially when we have a speaker who has said that he wants to see the House work its will,” King says. “The will of the House is to cut off funding to ‘ObamaCare’ and we can’t fear a confrontation with the president or ‘ObamaCare’ will become so institutionalized that it will be impossible to pull it out by the roots.”

King says Republicans should refuse to provide any money to implement health care reform, and “stare down” the president, forcing Obama to shut the government down rather than Republicans.

“If he’s determined to shut the government down over ObamaCare itself, I think the American people will reject that tactic,” King says. “and if we’re afraid to confront that, then we will always lose here in the House.”