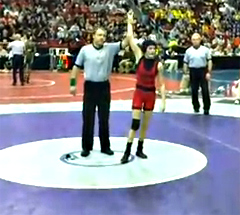 History was made at the Iowa State High School Wrestling Tournament today. Two females competed in the event for the first time and one of them scored a victory in the first round.

Freshman Cassey Herkelman of Cedar Falls had her hand raised by the referee after accepting a default by Joel Northrup of Linn-Mar.

Northrup, a sophomore who entered the tournament with a record of 35-4, issued a statement through Linn-Mar Athletic Director Scott Mahmens.

It reads – “as a matter of conscience and my faith, I do not believe that it is appropriate for a boy to engage a girl in this manner.”

Mahmens says the decision not to wrestle was made by Northrup and his family and coaches did not try to persuade him to compete. “We’re going to back our student-athletes no matter what,” Mahmens said. Reporters quizzed Mahmens about the family’s religious beliefs. “I don’t know, I take it, it’s just what the family believes.”

Herkelman advanced to the second round and will wrestle again Friday. She refused to speak with the media after the match. Northrup is home-schooled. His parents are not at the tournament as they’re expecting a child. Northrup is one of eight Linn-Mar wrestlers at the state tournament, so his forfeit cost the Lions possible team points.

“I think everybody on our team…he’s a Linn-Mar Lion and we’re going to support what he’s doing,” Mahmens said. “We’ll move on and he’s going to come back and wrestle well.” Mahmens was asked about Northrup’s emotional state following the forfeit.

“I’m sure it was hard for him like it would be for anybody, but it’s a decision his family made,” Mahmens said. The forfeit makes it impossible for Northrup to win an individual state title this season. “Obviously, his beliefs are more important to him,” Mahmens said. The other female wrestling in the tournament is also in the class 3A, 112 pound bracket.

Sophomore Megan Black of Ottumwa lost by fall in the opening round to Logan Ryan of Bettendorf.