You are here: Home / Fires/Accidents/Disasters / Fire destroys truckload of wine on I-80 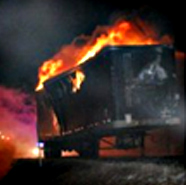 Two truck drivers transporting a load of wine cross-county had a rude awakening Sunday when their tractor-trailer caught fire on an Interstate 80 on-ramp in southwest Iowa.

Mike Kennon, the Cass County Emergency Management Coordinator, says the men were asleep in the cab of the truck, parked on the eastbound on-ramp at the Marne exit when the fire broke out in the trailer’s refrigeration unit.

Kennon says they tried to separate the tractor and trailer but both were on fire. He says the men escaped with only the clothes on their backs. The driver told Kennon there was $1,000 worth of cash and checks in the cab that went up in flames.

A load of wine in the trailer, which was being transported from Oregon to Chicago and points east, was also a total loss, as was the semi. No injuries were reported. Kennon transported the two Romanian truck drivers to a hotel in Atlantic, where they were also receiving assistance from the American Red Cross. The men’s names were not made available. 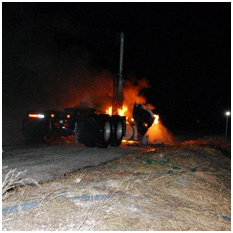 Truck cab burns along I-80.