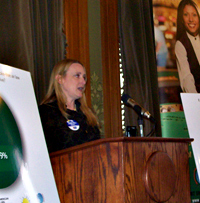 Anti-smoking forces are renewing their push for legislation that would ban smoking at the state-licensed casinos in Iowa.

The Iowa Tobacco Prevention Alliance commissioned a poll which found 63 percent of the Iowans surveyed want to see smoking banned on the casino floors.

Cathy Callaway, a spokesperson for the Tobacco Prevention Alliance, says casinos in the neighboring states of South Dakota and Illinois are smoke-free, and Iowa’s should be, too.

There’s a bill pending in the Iowa Senate that would ban smoking at the casinos, but it must clear a committee by the end of next week or that proposal is dead for the year.

“Passing the Smoke Free Air Act was not an easy lift and we anticipate this will be difficult as well,” she says. “But we’ll continue the fight until we get it done.”

The state law which bans smoking in most public places took effect in July of 2008, but the law contains an exemption which allowed smoking on the gambling floors of the state-licensed casinos. Troy Stremming, senior vice president of government relations and public affairs for Ameristar Casinos, says allowing smoking in the casinos is a “business rights” issue.

“Businesses should have the opportunity to run the business how they see fit when they’ve invested thousands or millions of dollars in facilities,” Stremming says.

According to Stremming, it’s a competitiveness issue, too, as the proposed smoking ban for gambling facilities would not extend to the tribal casinos in the state. “And we do believe it would put the casinos at a disadvantage when faced with competition from Native American casinos,” Stremming says.

Ameristar owns eight casinos in seven states, including a casino in Council Bluffs.