Former Iowa State stand-out Matt Blair played defense for the Minnesota Vikings for a dozen years, but he’s at the Iowa capitol today, playing a bit of offense on a health and safety issue.

Blair is backing a bill that would require Iowa student athletes who leave a game after a concussion to get written medical clearance before returning to play or practice. “In the past, it was the coaches saying, ‘Can you go to practice? You’re not tough enough,'” Blair said during a statehouse news conference.  “So your mind’s saying, ‘I’ve got to go back to practice’ — and I went back to practice.”

Blair had two concussions during his playing career. One was in 1971 during an Iowa State game against Oklahoma and the other was when the Minnesota Vikings were playing the Washington Redskins. “It was an NFC Championship Game. And do you think I’m going to come out of that game? No way, so I stayed in,” Blair said. “But I’m fortunate and blessed and I’m thankful that I’m here today.”

But Fred McNeill, Blair’s roommate for 11 years as a Viking, isn’t so lucky. McNeil suffers from short-term memory loss due to concussions and he’s no longer able to drive or practice law. “I never remember when he got hurt. Now, if he would have told the coaches he got hurt, back then in the ’70s and ’80s — well, we probably would have told him, you know, ‘It’s o.kay,'” Blair said. “But today, we have to have better rules.”

Former Iowa State quarterback Sage Rosenfels — a back-up on the New York Giants roster — got a concussion as a junior in high school.  “I remember getting hit.  I got a knee to the head and got up and  I was really woozy.  I didn’t really know where I was at and I was done for the game,” Rosenfels said. “It’s something that’s being taken very, very seriously at all levels. I know the NFL’s taking take it very seriously — the players, the trainers, the coaches — because you’re seeing the long-term, negative effects and I also have a sister who has a brain injury, so the whole concussion issue hits close to home for me.”  His sister suffered a brain injury in a car accident. 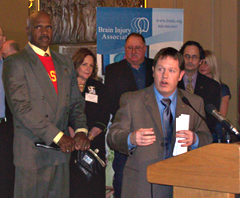 Rosenfels is a Maquoketa native and knows Senator Tod Bowman, a Democrat from Maquoketa who is a wrestling coach. Bowan has co-sponsored the bill that would require Iowa students who suffer a head injury to get a doctor’s o.k. before they return to practice or play.

“I understand the student athlete’s draw to get back to help their teammates, to help their team, the competitiveness and the coach. And we can’t forget the parents in this, too,” Bowan said. “There’s a lot of parents out there that want their kid in there and aren’t educated on the dangers of concussions.”

Tate Jensen, a ninth grader at Adel DeSoto Minburn High School said when he was in junior high his mother wouldn’t let him return to play football for several weeks after a concussion, because of his persistent headaches.

“I thank my mom for making me sit out, because if it was up to me, I probably would have gone back the next game,” Jensen said.

Brianna McAninch, a junior at Norwalk High School, suffered a concussion six weeks ago during a basketball game and she’s not yet been cleared to practice or play sports. “It hard for us to just sit on the bench and watch our team go out there and play, but the brain is the most important thing for us to keep healthy,” McAninch said.

Alan Beste, assistant executive director of the Iowa High School Athletic Association, said his group’s website has the “most current” and “scientific” information about concussions and suggested “return to play” rules.

“This is really easy legislation for us to support because it fits the mission that we’ve had for years and years — and that’s to protect the health and safety of student athletes across the state of Iowa,” Beste said.

The National Football League sent a representative to the statehouse today to speak on behalf of the legislation. Kenneth Edmonds, the NFL’s’s director of government relations and public policy, said today’s NFL players and coaches are more aware of the symptoms and risks of brain injuries. “The NFL and its teams strongly support this important bill which raises awareness of and protects youth athletes from the risks of concussions,” he said.

The bill is set to clear a committee today, meaning it survives a key deadline this Friday and remains eligible for debate in both the House and Senate.  Nine states have passed restrictions which require a doctor’s permission slip before a student athlete who’s had a brain injury can return to practice and play.  Ten other states are considering such a restriction.