You are here: Home / Human Interest / Medal of Honor soldier’s mom offers encouragement to others (audio) 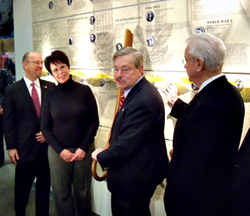 The mother of Iowa Medal of Honor recipient Sal Guinta spoke Saturday at the Goldstar Military Museum at Camp Dodge prior to the ribbon cutting for a new exhibit that honors her son and the other Iowans who have received the nation’s highest military award.

Rose Guinta  of Hiawatha told a group of “Blue Star” mothers to continue to tell their children “you can do this.” Guinta says it’s not an easy job and she doesn’t think a lot of people realize the hard spot moms are in to encourage their kids that they can do their job in the military.

She says they should tell their kids they’re backing them, they want them home, but most of all they should say “you can do this.”

Guinta says a friend of her husband Steve gave them some good advice for talking with their son. It was that parents should not always ask their children in the military what they are doing and how are they doing. She says that’s because the parents are not going to be able to understand that, and she admits when she hears her son’s stories, it boggles her mind. And she says when they do call, it is usually a very shot call and the soldiers don’t want the call to be about them.

Guinta encouraged the parents to talk to their kids about things that are going on at home. Guinta says they want to hear what’s happening back in the states, they want to hear how mom and dad are doing, and it draws them back into what’s happening in the states, it’s what is really important to them whether it be the good or bad things that are happening. Guinta says if you don’t have a child in the military, you can still be a big support to those who do.

Guinta says the best way to be supportive is when you see someone in uniform, or see someone that has a child deployed, you should acknowledge them, and don’t try to push it under the carpet. She says acknowledge that they have someone gone and they hurt, and it is hard. “All of us can be creative in the way that we help each other, it’s not always easy to come up with an idea, but I bet if you try, you’ll find one,” Guinta says.

Guinta took questions about the experience of going to Washington to see President Obama award her son the Medal of Honor. She says they realized how big a deal it was after landing at the airport and seeing lots of police cars lining up for a motorcade. “We got in and we started moving and the sirens went off and its was ‘oh my gosh this is ours,’ and that whole time we were in Washington we had a motorcade, and it’s kind of cool, it is cool,” she said. Guinta said meeting the president and the whole medal ceremony was kind of a blur.

She says the president came in and introduced himself, they took a quick picture, and then headed to the ceremony, and things then got kind of blurry for her. Guinta says the thing that impacted her the most came the next day when they went to the Hall of Heroes at the Pentagon and saw a picture of her son with the fellow soldiers he risked his life to save in battle in Afghanistan, Josh Brennan and Hugo Mendoza, sitting on a rock.

Guinta says both of the men were killed within 48 hours of when the picture was taken. She says Mendoza’s father came in and kissed the picture of his son. “And I was overwhelmed in the sense that I get to kiss my son, you know, I was so humbled by having his parents there, having both those young men’s parents there, and I think that was the biggest part of all of it, being able to spend time with them,” Guinta said.

Guinta helped the governor cut the ribbon on the Medal of Honor exhibit and later talked with and took pictures with the other mothers who attended the event. Sal Guinta remains in the military in Italy, but plans to leave the military to go to college later this year. Read more on Sal Guinta here:http://wp.me/p16gWZ-hiq