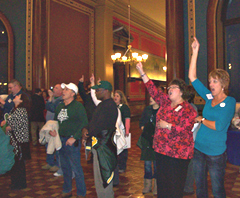 Dozens of members of the AFSCME union began streaming into the statehouse early this afternoon, chanting “kill that bill.”

After a brief rally in the center of the capitol building, the union members made their way up to the seating galleries that overlook the Iowa House.

At about two o’clock this afternoon, the Iowa House began debating a bill that would make changes in Iowa’s labor laws. AFSCME Council 61 president Danny Homan says his union’s members will stay at the capitol for as long as the House debate lasts.

“We’re just coming up here to let the legislature know that the bill they are going to debate today is just plain wrong and it takes away basic rights from AFSCME members all across the state — whether they’re state, city, county or school,” Homan says. “It’s just wrong to take a person’s right away to bargain over health insurance, to bargain over layoffs.”

Representative Ron Jorgensen, a Republican from Sioux City, says the bill strikes a better balance that protects taxpayers from bearing the entire brunt of spiraling health care costs for government workers. “We owe it to the taxpayers of this state to save as much of their money as possible, while also providing them with the best possible services,” Jorgensen says. According to the governor, 87 percent of state workers pay nothing toward their health insurance premiums. 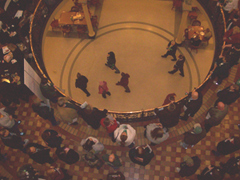 AFSCME members in the rotunda of the capitol.

Jorgensen is a rookie legislator, by the way, and joked about that during his opening statements on the bill. “Being a freshman legislator and with this being my first bill that I will floor manage, I want to thank leadership for allowing me to ease into this process by giving me a non-controversial bill as my first one,” Jorgensen said, drawing laughter from his House colleagues.

“Seriously, I recognize that this bill generates a lot of emotions on both sides. I understand that and I respect that.” At about 2:15 this afternoon, the House began debating the first of more than 90 amendments Democrats have drafted that would make changes in the bill — changes Republicans, who have the majority of votes in the Iowa House, will resist.

House Republicans have adopted a new policy which forbids votes in the Iowa House between the hours of midnight and eight a.m., so the debate on this legislation could stretch into late Thursday evening.