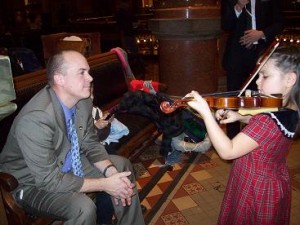 A northwest Iowa legislator has moved his young family to Des Moines during the work week rather than be separated for up to five days every week from his wife and three children.

As the Iowa House debated late into the night last Wednesday, seven-year-old Isabella Taylor stood in the capitol’s marble and tile rotunda, practicing her violin as her father coached her. Isabella’s father, Representative Jeremy Taylor of Sioux City, taught himself to play so he could help Isabella with the notes and how to position her fingers and the bow.

“Just starting Suzuki so I could be able to do a little practing at home and know what I was talking about,” Taylor says, with a laugh.

Home these days is both Sioux City and Des Moines. Taylor won his first term in the Iowa House last November and, when the legislature convened in January, it wasn’t just him who came to Des Moines for the work week. “So we kind of did the family affair and all came down,” Taylor says.

The entire family makes the trip to Des Moines on Sunday nights and returns to Sioux City when the House wraps up for the week, ususally on a Thursday night. About a year and a half ago, Taylor had the experience of being separated from his family for long stretches of time. He’s in the Iowa National Guard and was out-of-state at a training camp for about eight months.

“We tried to move heaven and earth, so to speak, to be able to see each other between training even if it was for a day or two,” Taylor says. “So we knew it would be a transition, coming down here as a family, but thought, ‘You know what? It’s worth it. We could make it work.'”

Many legislators spend the workday in the statehouse, but their early mornings and evenings are occupied with events set up just for lawmakers. For example, on one Wednesday in February seven different legislative receptions were held. Taylor is more likely to choose a meal with his wife and kids than to stand in a hotel ballroom, eating appetizers and chatting.

“I’m probably getting a D- on going to the receptions, but if someone from Sioux City’s there, I go,” Taylor says. “Otherwise, I love being with (my family) and having them here.”

Taylor, who is 32, met his wife, Kim, in Vietnam when he taught English at a university there. Isabella is their oldest child and she’s going to a Des Moines elementary school Mondays through Thursdays. Except for this past Friday, the family has been at home on Fridays, and Taylor and his wife do the lesson plan for Isabella.  “And so back home, then, we’re doing a little bit of violin and a little bit of reading and whatever else we can fit in,” Representative Taylor says.

The Taylors also have two boys, a five-year-old and a one-year-old. As the Iowa House debated late into the night this past week, there was a break in the action, so Taylor’s wife brought the kids to the statehouse for family time before bedtime.

“Had dinner together,” Taylor says. “Played some violin and made sure the homework was done.”