You are here: Home / Politics / Govt / Mississippi governor here to let Iowans know “what a Haley Barbour is”

Haley Barbour — the Mississippi governor who is mulling a run for the Republican presidential nomination — is in Iowa again today, introducing himself to a variety of Republican groups.

Barbour bought the box lunches for the Iowa Federation of Republican Women who were meeting in Des Moines. “You can tell I’m a conservative ’cause lunch is so cheap,” Barbour joked at the beginning of his remarks to the group.

As the women and a contingent of men in the room munched on sandwiches, chips and cookies, Barbour quickly turned to the reason for his trip. “I’m seriously thinking about running for president…If I run, I’m going to run to win Iowa — to win Iowa in the Caucuses and to win Iowa in the General Election because I think Republicans can win Iowa in 2012 and, in fact, I think it’ll be a key state in our campaign,” Barbour said. “I also know from my own state if you want to win, you need the Republican Women.”

During an interview with Radio Iowa, Barbour suggested Iowans and Mississippians have a lot in common. “People here are very family-oriented.  They go to their kid’s events at schools. They go to football games and track meets and piano recitals, very similar to the families that my children grew up around, in fact that I grew up around,” Barbour said. “And so I’m very at home here.” 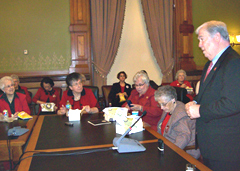 Haley Barbour speaks during an appearance in Des Moines.

Barbour has been to Iowa twice in the past three weeks and plans a return trip before the end of March.

Barbour, who was an aide to President Ronald Reagan and once served as chairman of the Republican National Committee, describes these trips as crucial for a candidate who’s not well known beyond the ranks of party insiders.

Representative Renee Shulte, a Republican from Cedar Rapids, listened to Barbour speak late this morning. Shulte says the field is “wide open” for presidential candidates in this political season. “It’s fun to have him here. It’s fun to have the excitement in the room and to get the Republicans all energized again,” Shulte says. “They’ve all got such great ideas so it’s fun to hear who’s next and who’s coming through.”

Barbour is set to speak tonight in Davenport at a fundraiser for the Iowa Republican Party.