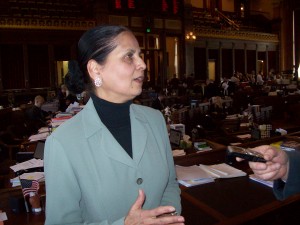 On Thursday, five state senators are scheduled to review a bill that eventually may allow MidAmerican Energy to collect fees from its utility customers to cover the costs of building a new nuclear power facility in Iowa.

John Davis, a lobbyist for MidAmerican Energy, says his company has to “inform legislators of the differences” between what MidAmerica envisions building in Iowa and the three damaged nuclear reactors in Japan that are in meltdown.

“What we’re proposing is a small, modular reactor, not nearly the scale of that is there (in Japan) and does not require the active controls to shut it down,” Davis says,  “It is passive and uses gravity to stop things, so that if anything should occur, that it remains safe.”

The nuclear reactor would be build below ground, with a pool of water above that Davis says would be released for cool down in an emergency. According to Davis, it’s time to have a “serious discussion” about nuclear power generation because of rising pollution concerns about coal-fired power plants and questions about whether there’s an adequate supply of natural gas for plants that are fueled by natural gas.

“We’re hopeful that getting the facts on the table about what we’re proposing, folks will be able to draw the conclusion and make the decision that it’s the prudent way to go,” Davis says.

Howard Learner, executive driector of the Environmental Law and Policy Center, was at the statehouse Monday, questioning details in the bill MidAmerican Energy is seeking. “Why in the world should Iowa ratepayers and taxpayers subsidize a private company owned by a billionaire to pay in advance for a nuclear power plant that the company may choose not even build?” Learner asked. MidAmerican is part of Warren Buffet’s business empire.

Davis, the MidAmerican lobbyist, says the legislation would give the Iowa Utilities Board the authority to determine whether the construction plan for a new nuclear power facility is “reasonable and prudent” for the customers of MidAmerican who’d be financing it.

“You’re really talking about taking a technology that’s been available for decades and that’s been used by the United States Navy to power submarines and aircraft carriers, figures out how to bring those on land,” Davis says.

Learner questions whether Iowa customters of MidAmerican should be forced to finance that kind of an “experiment.”

“(MidAmerican) is attempting a new design that has not yet been proven,” Learner says. “It might work very well.  It might not.”

Senator Swati Dandekar, a Democrat from Cedar Rapids, is chair of the Senate Commerce Committee and she’s on the five-member subcommittee scheduled to review the issue Thursday. “We also have to see that we look at the scenario, what happened in Japan,” Dandekar says. “If that happens in Iowa, how do we make sure that all our citizens are safe?”

Dandekar has asked the C of MidAmerican to attend Thursday’s meeting to answer questions.
*
[capnukes5]  :17   :and protecting them.”
*
(as said)”We don’t have earthquakes in Iowa.  We don’t face them like Japan does,” Dandekar says. “Having said that, we still have to be cautious and make sure we are doing what is right for out citizens and protecting them.” Learner, the environmental lawyer, says while there isn’t likely to be a tsunami in Iowa, floods and tornadoes are common place and a concern.
*
[capnukes7]    :22  :tinker toys here.”
*
(as said) “This is not to say that we ought to shut nuclear plants down, nor in light of what’s happened in Japan can we close our eyes to the reality of increased scrutiny that ought to be done by the right expert federal and state agencies to make sure that everything is safer than safe,” Learner says. “We’re not dealing with Tinker Toys here.” Dandekar says one of the selling points for nuclear power is that it doesn’t have a “carbon foot print.”
*
[capnukes6]      :15  :for our citizens.”
*
(as said) “If we decide to go ahead, then we will have to educate the public and say why it is good for Iowa and why it is good for our citizens,” she says. MidAmerican has conducted a study and determined “there are places in Iowa” where a nuclear plant could be built.