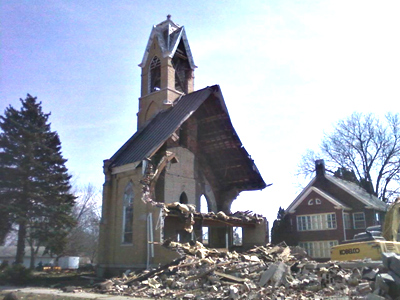 The 102-year-old St. Joseph's Catholic Church in Duncombe was torn down Wednesday.

The sad reality of shrinking small towns hit the Webster County community of Duncombe hard as the 102 year old St.Joseph’s Catholic Church was demolished Wednesday. A giant pile of brick and stone is all that remains of the church in the community located between Fort Dodge and Webster City.

The Catholic Diocese in Sioux City closed the church in November of 2008 along with two other Webster County parishes in Fort Dodge and Barnum due to the shortage of priests. Duncombe mayor Bob Taylor watched the demolition of the church, and was sad to see it happen.

“It was too nice a building to be tore down and the diocese says it has to come down, it’s a bad deal, that’s all there is to it,” Taylor. Taylor and the Duncombe City Council did all it could to persuade the Diocese to keep the church open. The church building had been for sale for two years without a potential buyer and they hope to find another use for it. 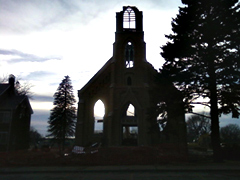 Partial remains of St. Joseph's Catholic Church in the twilight.

Parishioners who belonged to the church and other Duncombe residents kept vigil throughout the day into the evening yesterday as the demolition continued. Taylor said the loss of St. Joseph’s is hard to take. “People are sad about it, but nothing we can do,” Taylor said.

The closing of St. Joseph’s in Duncombe has been hard for its one time members with feelings of sadness and anger. Since the closing of the church, the parishioners of the church now have to drive out of town to nearby Webster City or Fort Dodge to attend Catholic services. A few have decided to become members of either the Lutheran and Methodist churches in Duncombe.

Taylor said the big question remains on what will happen to the property where the church sat for over a century. “I have not idea what’s gonna happen, and we lost property when we lost the trailer court, and it seems like everything is being torn down, and in a small community, that hurts,” Taylor said.

Crews will resume their work today in removing the debris from the St. Joseph’s property. Over the last few weeks crews focused their activity on the inside of the church in taking down the stained glass windows from the church.