You are here: Home / Business / Author to speak about his book on social media 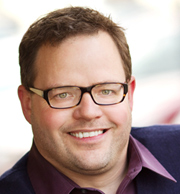 An author who was just named as having the world’s number-three social media blog will give two lectures today in central Iowa. Jay Baer, who calls himself a social media strategy consultant, says one of his talks will focus on the challenge of how to measure the success of your social media program.

“It’s a topic that’s quite vexing and complicated,” Baer says. “A lot of people are excited about social media, which is fantastic, but not really sure if Facebook or Twitter or YouTube or blog or anything else is actually working. Am I actually making money at this — or saving money? It’s not an easy nut to crack.”

Baer, whose business is based in Indiana, says social media is more rooted in corporate culture and sociology than it is in technology. A key aspect of social media is that it’s about people, not logos, he says. As an example, one of Radio Iowa’s affiliates posts news reports on Facebook in addition to updates about the mood of the radio station’s pet cat.

“The mistake a lot of companies make is they focus on the ‘media’ and not on the ‘social’ and they turn it into the world’s shortest press release,” Baer says. “Ultimately, that gets pretty disinteresting, pretty fast. So, I like the cat angle because it’s memorable and it humanizes it. A lot of what we try and do in social media is humanizing companies to build some level of kinship between the company and its customers or prospective customers.”

Some companies may decide their website is a big enough presence on the information superhighway and social media is unnecessary, but Baer says they’ll be left behind in the break-down lane. “There was a time where we didn’t have to have telephones or fax machines or email or a website, but now we do and we’ve had to change our businesses dramatically as a result of each of those technologies,” he says.

“This is just the next jump on that continuum. Customers will eventually demand that they are allowed to interact with you in social media the way that customers demanded that you have a website ten years ago. A study finds 83-percent of Americans are active in social media, while Facebook boasts 620-million members globally. More time is now spent on social media and social networking than on email, a fact Baer calls “staggering.”

His new book is called: “The Now Revolution.” Baer is delivering a seminar in Des Moines starting at 11 AM for which registration is required. Another lecture and book-signing is free and open to the public at 6:30 P.M. at the Downtown Des Moines Public Library.