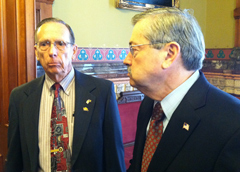 Governor Terry Branstad met with retired U.S. Navy Rear Admiral Gerald Gneckow, a former commander of the U.S.S. Iowa, Wednesday as part of the effort to turn the Iowa into a memorial museum.

Gneckow visited the state capitol on behalf of the Pacific Battleship Center, which hopes to dock the Iowa at a port near Los Angeles.

Gneckow says a lot of people he knows in the U.S.S. Iowa Veterans Association are “anxiously awaiting the opportunity to set foot aboard again,” and he says people who have never seen a battleship will be excited by it too. Gneckow says the Iowa has a long and proud history.

“First of all because it bears the name of the state of Iowa, but it has done so many unique things,” Gneckow says, “it carried President Franklin Roosevelt to the Teheran Conference (during World War Two), it was in Tokyo Bay at the signing of the surrender during World War Two.”

Robert Kent of the Battleship Center says they are hoping to be able to take over the Iowa. Kent says Los Angeles is “absolutely opening their arms and welcoming the Iowa,” as he says they have been given the best possible port and they cannot wait to get the ship down there. Branstad says residents of the namesake ship’s state would like to see it happen too.

“Obviously the people of Iowa look forward to an opportunity to see the U.S.S. Iowa again, and to be able to have that opportunity to get on the ship and see it, it is an important part of our history and heritage as well,” Branstad said. The governor said he had found memories of when the Iowa was recommissioned during the Reagen administration. Gneckow was commander of the Iowa from 1984 to 1986, and is on the advisory board of the Battleship Center.

The Battleship Center is one of two groups vying for the ownership of the ship. The other group — the Historic Ships Memorial at Pacific Square — wants to turn the Iowa into a museum at the former Navy shipyard at Mare Island in Vallejo, California.

The U.S. Navy is expected to make a decision on where the battleship will go later this year.