You are here: Home / Education / ISU President Geoffroy plans to step down 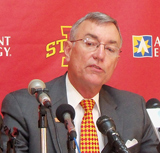 I.S.U. President Greg Geoffroy says he will step down.

Iowa State University president Gregory Geoffroy announced today he is leaving the school. Geoffroy said he informed the Board of Regents this week that he plans to leave the university no later than July 31st of 2012 and will remain at the school until a successor is name.

Geoffroy told Radio Iowa that he is looking cut back on his workload after nearly 10 years of leading the school Geoffroy says it’s “one of those important life decisions” he has been thinking about for some time.

He says he will be turning 65 soon and wants to be able to spend more time with his grandchildren who are spread out across the country.

Geoffroy talked about making a change in his job, but is not ready yet to say he is retiring. “I’m not entirely sure what I want to do, and I’ll make that decision as I get closer to the transition,” Geoffroy says. “I could retire, I could take up my faculty position in chemistry and teach freshman chemistry, which I used to love to do.” He says he has time to finalize his plans. Geoffroy says the state, and the state supported universities are facing some tough budget times now, but he is confident his successor will see things get better.

He says public universities are going to continue to face budget issues everywhere, but he says he is optimistic about Iowa. “I think Iowa’s economy is going to recover very nicely, we are doing much better than most other states, I’m very optimistic about what’s ahead for higher education in the state,” Geoffroy says. Geoffroy says the people he has recruited to the school to work with are one of the important things he has accomplished.

Geoffroy says the appointments he has made at all levels have brought in “a great team of university leaders that is just fun to work with.” He says you can’t do the job by yourself, you have to bring in good people and he is very proud of that. Geoffroy became the 14th president of Iowa State University in July of 2001. He came to Ames from his position as senior vice president for academic affairs and provost at the University of Maryland, College Park.

Board of Regents President, David Miles, says the search for Geoffroy’s successor will be discussed at the board’s April 28 meeting.