You are here: Home / Education / Branstad to superintendents: follow my recommendations (audio) 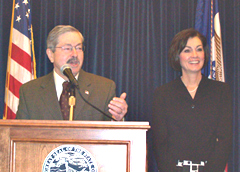 Governor Branstad’s advice to Iowa school administrators is to follow his recommendations on state funding for schools since partisans in the legislature are still quarreling over how much state support schools will get for the next academic year.

“If I were a superintendent, that’s what I would do,” Branstad told reporters this morning.

April 15th is the deadline for schools to complete their budget plans for the school year that begins this fall. Branstad has proposed an end to the state’s “universal” preschool program for four-year-olds, replacing it with a voucher program for low-income parents who want to enroll their kids in a public or private preschool.

Branstad and Republicans in the Iowa House have proposed no increase in general state support of public schools, while Democrats in the Senate are pushing for a two percent hike.  According to Branstad, state tax revenues aren’t growing quickly enough to supply more state tax dollars to schools.

“What we have offered is something that offers stability and predictability so that they know what the budget will be,” Branstad said. “And it is an austere budget and I would remind you that (state tax) revenue is still below where it was two years ago. It’s a little higher than it was last year, but we inherited a financial mess that we’re committed to straightening out.”

Democrats in the Senate believe they’re devised a way to force Branstad to maintain state support for preschools at current levels. Branstad isn’t rejecting that idea publicly, however.

“My interest is to work with them and not to make any threats but instead to say how best we can do things and I believe that we’ve created a proposal that makes sense,” Branstad said this morning. “And we’re willing to work with the legislature to accomplish it.”

An Iowa Association of School Boards  spokesperson warned last week that there will be layoffs of “epic proportions” in Iowa schools if Branstad’s budget recommendations are ratified by legislators.