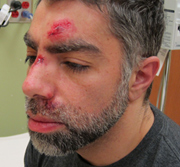 No charges will be filed in the alleged assault of an Arab-American filmmaker who claimed he was the victim of a hate crime earlier this month in Fairfield.

“Some of the things that were said didn’t match up with known facts that we had. Things just didn’t seem to match up,” Dille told Radio Iowa. The incident took place during the early morning hours of March 6 at a home in Fairfield.

Fourty-one-year-old Usama Alshaibi claimed he had walked into a party at the home and was beaten simply because of his name. Dille says there was no “party” – but rather four young people who were watching a movie. The report shows Alshaibi had been drinking at a bar for several hours prior to entering the home.

“Our belief is that part of what happened was because (Alshaibi) was intoxicated. He was disoriented and went in the opposite way of his home,” Dille said. Alshaibi claimed he was beaten and called racial epithets. Dille says because no crime occurred, there’s no basis for calling it a hate crime.

“There were probably things said that were not appropriate, but to prove that those rise to the level of something that would make it a hate crime…we don’t believe they did,” Dille said. A photo taken at the hospital a short time after the incident shows Alshaibi with a cut to his forehead and blood running down his face.

Dille says Alshaibi could’ve fallen on his own or the injuries may’ve occurred when he was pushed out of the house. “Under Iowa law, the Castle Doctrine, you don’t have to flee from your home. You can take whatever measures needed to make your home safe from an intruder. It may’ve happened then, but that would not be an assault,” Dille said.