You are here: Home / Military / Loebsack back from trip to Pakistan and Afghanistan 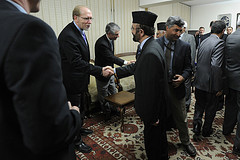 Iowa Congressman Dave Loebsack returned early this morning from a four-day visit to the nations of Pakistan and Afghanistan.

Loebsack, a Democrat from Mount Vernon, says he spent just over a day in Pakistan where he met with several key governmental officials. He says the discussions revolved around the Taliban, the enemy forces that are causing so much havoc for American troops in neighboring Afghanistan.

“They have safe havens in Pakistan so it’s really important that the Pakistani government do all it can to reign in those folks,” Loebsack says. “They are carrying out missions against them, especially in the northwest part of their country, but there are Al Qaida also in Pakistan. Pakistan’s very critical in this fight.”

The congressman also spent two days in Afghanistan where he met with a number of Iowa-based National Guard troops who are in the midst of a year-long mission there. “We’re really proud of what the Iowans are doing,” Loebsack says. “They really are taking the fight to the Taliban. I was able to bring them letters from elementary school kids. They really appreciate that, a little something from home. My trips to Afghanistan are at least as much to visit with the troops and do what I can to support them as to meet with leaders, both Afghan and American.”

He says the Iowa National Guard members, most of whom have been in Afghanistan since last fall, are really making a name for themselves and they’re having a positive impact. “I have a lot of confidence in their ability to carry out their mission,” Loebsack says. “I hear nothing but good things about them from our military leaders who are very, very aware of what they’re doing. We’ve got around 3,000 Iowa National Guard there and that is a large percentage, given that Iowa only has 1% of the people in the country. They just do an absolutely fantastic job.”

He says some of the Iowa guard members have been on multiple deployments overseas already, while others are on their first mission, yet they’re each giving the effort their all. “The top leaders of our military understand that,” Loebsack says. “General Campbell, who runs the show in the eastern part of Afghanistan for our military, explicitly told me those National Guard troops are every bit as well trained and as good in the field as the active duty folks.”

He says everyone is focused on the agreed-upon date of 2014 for the U.S. to turn over the security of Afghanistan to that nation’s own military and police forces. Loebsack says the goal is to do so sooner, not later.