You are here: Home / Business / Two named SBA Persons of the Year 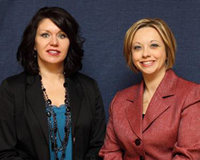 Two women who founded an outpatient children’s clinic in northeast Iowa are being named Iowa’s Small Business Persons of the Year by the Iowa office of the U.S. Small Business Administration.

Blean says, “Being pediatric focused, our therapists’ continuing education is really geared towards that population and therefore, you know more of the trends out there, the new things, the new studies and we bring all of that to the table.” The two opened the office in 2006 between just themselves and a third therapist.

Now, they have 18 full-time and five part-time staff members. The office space has more than doubled in size. Blean says the biggest challenge has been keeping up with the continued growing staffing needs. She says they’ve pushed a true team atmosphere and it’s paying off.

“We really try to communicate with the physicians, with the therapists in the schools, the caregivers, Lutheran Social Services, anybody that’s involved in that child’s care,” Blean says. “We try to communicate with them and educate them and work together as a team to help that individual, that family, get from Point A to Point Z and they’re going to get there that much quicker if we’re all working together.”

Blean says she was stunned to be named with her business partner as this year’s statewide winner of the title, but she notes, they methodically built the business and started with a solid plan. “We didn’t just dive into the deep end,” Blean says. “Kelly and I started talking about it and met and planned for over a year before we opened our doors. We did a lot of legwork in the forefront, going and meeting with pediatricians, with services that we would plan to partner with or that we knew our business would help support and that we could help each other. We did a lot of that before we even opened our doors.”

Blean and Heysinger will represent Iowa at National Small Business Week ceremonies in Washington, D.C., in May where they will compete for the national version of the Iowa Small Business Persons of the Year award.