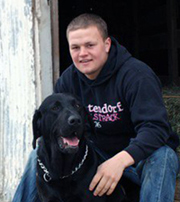 A soldier from southwest Iowa’s Cass County was wounded this week in Afghanistan.

Allen was transported to the U.S. military hospital at Bagram Airfield in Afghanistan for medical treatment. His father, Mick, said his son was shot three-times in the shoulder and abdomen, but should make a full recovery. Two other soldiers were killed in the firefight.

Nate Allen is a 2006 graduate of the Atlantic High School, where he played golf and was a defensive lineman on the football team. His mother, Pat Wiederien, is an art teacher at the school.