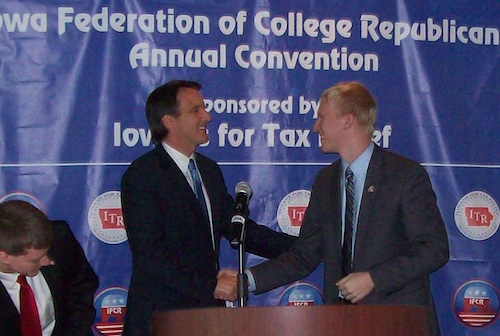 Pawlenty spoke Friday night at an Iowa College Republicans event in Des Moines.  The likely Republican presidential candidate didn’t start his speech with his critique of Obama’s foreign policy, however.  Pawlenty began with a reference to actor Charlie Sheen.

“Now, we may not in this room have ‘tiger blood’ like he does,” Pawlenty began and the crowd laughed. “But we do have something else in common with him. There’s going to be a lot of winning on the Republican side in 2012.”

A few moments later, Pawlenty told the crowd of college students from across the state that Obama had “duped” their generation in 2008.

““What the younger voters have figured out this is really a broken relationship. He made soaring promises, set grand expectations. He’s broken those promises. He’s failed to fulfill the expectations. If this was a Lady Gaga song, the relationship between the youth vote and Barack Obama would be ‘Bad Romance,’” Pawlenty said, as the crowd began to react, a bit more slowly than they had at the Sheen reference. “You know what I’m talking about.”

Pawlenty spoke for about 15 minutes, telling the crowd about his childhood in a working class family and how he passed out leaflets as a college student in 1980 to help Ronald Reagan’s campaign. Pawlenty was nearing the end of his speech when he blasted Obama’s handling of foreign affairs.

“We’ve got a president now who has projected uncertainty, delay, equivocation and, in my view, very misguided and confused and incoherent national defense and foreign policy on behalf of this great country,” Pawlenty said.

During a brief question-and-answer session with reporters, Pawlenty pointed to the way the U.S. handled the crisis in Egypt and the Obama Administration’s decision to junk the anti-missile defense systems planned for Poland and the Czech Republic.

“Those are just examples of, I think, an incoherent, uncertain, inexperienced hand on the throttle of our foreign policy,” Pawlenty said. “And it’s not only misguided, it’s dangerous.”

Pawlenty said while there is a “complexity” to affairs in the Middle East, he said Obama had committed U.S. troops to a military action in Libya that’s “preposterous” because it has unclear goals and “subordinates” U.S. interests to those of the United Nations and the Arab League.

Listen to Pawlenty’s speech and Q&A with reporters afterwards.