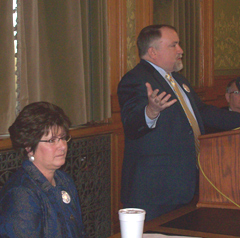 By law, legislators and the governor are supposed to set the level of general state aid for public schools in early February, but Democrats have proposed a two percent increase, while Republicans say the state’s in bad financial shape and schools shouldn’t get any increase at all. The two sides can’t strike a compromise.

Brent Siegrist , executive director of the state’s nine Area Education Agencies, is a Republican who used to be Speaker of the Iowa House.

“It’s time to act,” Siegrist says. “You have thousands of educators out there, hanging in the wind out there, wondering if they’re going to get a pink slip.” Chris Bern of the Iowa State Education Association says the state teachers’ union estimates Iowa’s public schools will send pink slips to 15-hundred teachers and other school employees by the end of this school year.

“In Iowa, education and our children have always been our priority,” he says. “…We need to, in a bipartisan effort, work with schools, school boards, teachers, the governor and the legislature to make kids a priority again in Iowa.” Perry Schools Superintendent Lynn Ubben made a million dollars worth of cuts last year in the budget for her district and she predicts class sizes in elementary grades will swell and course offerings will diminish.

“It is our hope that the legislature and governor make the education of our Iowa children a priority,” Ubben said. Educators are urging the legislature to provide two percent more in general state aid to schools for the school year that starts this fall. Cedar Rapids Superintendent David Benson warned property owners in 277 school districts will see their taxes go up if the Republicans win this debate and schools get no additional money.

“As a flood-affected city still recovering from the devastating June, 2008 floods, our patrons are particularly sensitive to tax rate,” Benson said. Siegrist, the former Republican legislator who runs the state’s Area Education Agencies, says it appears to him there is room in a $6-billion state budget to provide about $55-million more for schools and cut taxes.

“It requires some tough decisions,” Siegrist says, “but they can do both.” According to Siegrist, there will be “dramatic” layoffs in the Area Education Agencies if there is no additional state aid for the coming school year.

For example, A.E.A. staff who work with children with special needs, like kids who have autism, may meet with that child once a week rather than twice a week, Siegrist estimates.