Governor Branstad has used his veto power to kill a new state rule that would have required utilities across the state to install new equipment on back-up generators.

The new equipment is designed to reduce pollution from the diesel-powered generators, similar to the catalytic converter that’s now standard on cars.

Utility officials say their customers would have to pay significantly more on their electric bills to pay for the new equipment on generators that are rarely used. Greg Fritz is C.E.O. of the North Iowa Municipal Electric Cooperative.

“Our members own 37 diesel generator units and the average hours of operation for those 37 units has been 11 hours per year for each of the last five years, so that’s 55 hours out of 43,800 hours,” Fritz says, “The estimated cost to put these catalyst units on our 37 generators is a little over $5 million.”

According to Fritz, some customers in his coop area would be assessed up to $27  more per month to pay for that equipment.

Pat Steif, general manager of Traer Municipal Utilities, has seven diesel engines as back-up power for his utility’s 1120 customers. “If we put the retrofit equipment on there, it’s going to cost us about $700,000,” Steif says. “…It’s going to cost every one of Traer’s customers around $7.20 per month extra.”

The average monthly electric bill in Traer is $100, so Steif says that amounts to a 7% increase. “I don’t think it’s fair to ask the customers of Traer to make that type of investment,” Steif says. Governor Branstad agrees. He issued an executive order today (Monday) which vetoes the Iowa Department of Natural Resources rule which required the pollution-control equipment on generators. 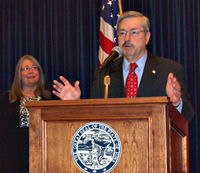 “It’s a new day,” Branstad told reporters this morning. “We’re actually listening to the people of the state and not just the bureaucrats.”

This vetoed state rule was patterned after a proposed U.S. Environmental Protection Agency that would not take effect until 2013. Branstad is among those lobbying the E.P.A. to abandon its federal rule on this subject as well.

“When a government agency does something that doesn’t make sense, we have an obligation as elected officials to represent our constituents and the people that are negatively impacted by that,” Branstad said this morning. Branstad promised to pursue regulatory reform during the 2010 campaign, promising a cost-benefit analysis for every existing and proposed state regulation.