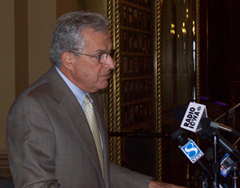 Iowa’s former Secretary of State — a Democrat who lost his bid for a second term this past November — has been confirmed to serve in Republican Governor Terry Branstad’s administration.

Michael Mauro is the state’s new Labor Commissioner.  Senate Democratic Leader Mike Gronstal points to the support Mauro got from 25 Democrats and 23 Republicans in the state senate, all of whom voted to confirm Mauro for the new post.

“There’s a lot of people that recognize Michael Mauro’s skills,” Gronstal says.  “He did a great job in the Secretary of State’s office, worked with county auditors across the state.”

Only one senator voted against Mauro for the new job.  Senator Dave Chelgren, a Republican from Ottumwa, faults Mauro for failing to have proper procedures in place for counting absentee ballots in Chelgren’s close race in 2010 that was decided by just 10 votes.

“As the Secretary of State, it’s that person’s responsibility to make sure that the auditor below them have a clear and concise manual to work off of,” Chelgren says. “I do understand that the manual was messed up by Culver, but Mauro had four years to fix those problems and failed to do so.”  Chet Culver, Iowa’s former governor, served as secretary of state for eight years before Mauro took over in January of 2007, running the state office which administers elections.

Two days after Mauro’s 2010 loss to Republican Matt Schultz, Republican Terry Branstad said Mauro had been a “very good Secretary of State” who ran state elections fairly.  Mauro has been working as a deputy in Branstad’s Workforce Development agency since January and Senator Pam Jochum, a Democrat from Dubuque, says that, too, may have helped Mauro win over some Republicans.

“There’s always going to be someone who doesn’t agree, but I think Mike Mauro will be a great leader,” Jochum says.  “He’s a very proven public servant.”