All but seven members of the Iowa House have voted to cut the power to a heated sidewalk that leads to a restricted entrance to the state capitol.

As you may recall, many of the Republican candidates for the state legislature ran campaign ads last fall, criticizing Democrats for spending money on heated sidewalks.

That never actually happened, however, and Democrats still seething at what they consider an underhanded campaign tactic have had their revenge.

Republicans were in control of the Iowa House in 2006 when legislators voted to heat a sidewalk for the capitol entrance legislators use. Representative Andrew Wenthe, a Democrat from Hawkeye, said the state will save $1700 a year by cutting off the electricity to that heated sidewalk. 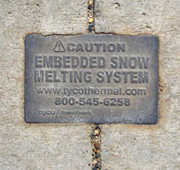 Representative Lance Horbach, a Republican from Tama, said that entrance is not just for legislators, it’s for disabled employees who work inside the statehouse.

“In the dead of winter, we don’t have to worry that they’re going to be able to make it up at least one sidewalk (to get) in here to do their job,” Horbach said.

That particular sidewalk, however, is not for the public’s use as a key card must be used to enter the building from that sidewalk.  Horbach suggested few of his fellow Republicans would have the courage to vote against the proposal because they don’t want to be attacked for spending money on a heated sidewalk, just as Democrats were attacked in the 2010 election.

“They’re more worried about a political postcard than they are at making sure our (Americans with Disabilities Act) compliance is maintained,” Horback said.

Representative Bob Kressig, a Democrat from Cedar Falls, suggested the sidewalk doesn’t need to be heated.

“The old shovel — that’s a pretty good way of removing snow — and a little salt will clear up the ice,” Kressig said. 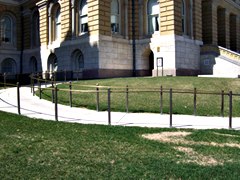 Representative Wenthe said the people of West Union “were not amused” to be the “butt” of Republican campaign ads about heated sidewalks that did not exist and that’s why the heated sidewalk for legislators should be history.

“The price you pay is that you…don’t get to enjoy the benefit of your very own taxpayer-funded heated sidewalk,” Wenthe said, “because the people of West Union won’t stand for that level of hypocrisy.”

Last March Representative Chuck Soderberg, a Republican from Le Mars, called heated sidewalks an “inefficient use of electricity.” On Monday night during House debate of the issue, Wenthe directed his comments to Soderberg and other House Republicans like Scott Raecker who suggested the state was spending money on heated sidewalks that should be used to keep teachers employed.

None of the public entrances to the statehouse have heated sidewalks, but the one sidewalk entrance used by legislators and state employees who work in the capitol is heated, with a plaque announcing it has an “embedded snow melting system.”