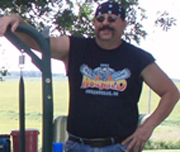 The family of the Sigourney man who was shot by the Iowa State Patrol after he shot and killed a Keokuk County Deputy Monday has released a statement. The brother and sister of 53-year-old Jeff Krier say in the statement that “this is a sad and difficult day for two Iowa families as we grieve the loss of our loved ones.”

Sam and Debbie Krier expressed sympathy and extend their prayers to the family of slain deputy Eric Stein. Their statement says they do not understand what lead to this tragic end and they do know the loss and grief caused by their brother’s actions “is immeasurable.”

They go on to say that Jeff Krier was a loving brother who struggled with mental illness for the past three decades and had difficulty managing after being diagnosed as bi-polar.

The statement says Krier had not been employed for the last 15 years due to his illness, and lived at the family farm with his parents until his mother and father moved into a nursing home in March. The statement also says while their brother’s mental illness may have contributed to the tragedy, it in no way provides comfort or solace to many who may have been impacted by his actions.

The brother and sister say they will cooperate fully with the investigation and asked the media to respect the privacy of their parents, who are both in a nursing home and unable to speak.