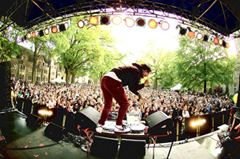 Organizers of an annual Independence Day weekend music festival in Iowa’s capital city have revealed several of this year’s acts.

“There’s no instruments, (he’s) a DJ. He uses his laptop to chop up samples of music and fuse them back together,” Rossi explained. “He’ll use very familiar riffs from the past four or five decades and then meld in a lot of hip-hop or rap into it.” Gillis, who’s from Pittsburgh, is known for putting on energetic live shows.

“He brings people on stage, it’s a big dance party and a lot of fun,” Rossi said. “He’s definitely an entertainer.” Girl Talk was originally scheduled to play the inaugural 80/35 Music Festival in 2008, but dropped out due to a conflict. Gillis played a sold-out show at People’s Court in Des Moines in early 2009.

More information is available at: www.80-35.com.