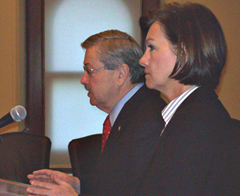 Governor Branstad expects that over the next four years, the State of Iowa will gradually take over the delivery of mental health services in Iowa — and pay most of the bills, too.

Branstad’s Department of Human Services director has been meeting with legislators of both parties since January to devise a new system that would replace the current hodge-podge of services for Iowa’s intellectually disabled and mentally ill citizens.

“It may well cost some more money, but I think the focus ought to really be on providing the best services, making sure they’re accessible everywhere in Iowa, that we have a uniform system that also provides assistance and treatment for people as close to home as possible.”

Iowa’s 99 counties currently manage and pay for much of the mental health care that’s available in Iowa. Lieutenant Governor Kim Reynolds says one of the problems, however, is that rural Iowans who’re suffering from a mental illness don’t have help nearby.

“Essential services exist only in a few counties,” Reynolds says.

Governor Branstad envisions expanding “telemedicine” services, so rural Iowans could talk with a psychiatrist via video conference. Branstad also expects to provide new state incentives to psychiatrists. “We have a shortage of psychiatrists in the state of Iowa,” Branstad says.

“We need to do more in terms of having more residencies and more opportunity to get that training in the state so they’re more likely to stay here.” A southeast Iowa deputy sheriff was shot last week by a man who had been diagnosed with bipolar disorder, an incident that has been cited by some legislators as an example of why it’s time to address the disparties in the state’s mental health care system. Branstad says there’s no “easy, simple” answer.

“This is an issue that needs to be handled in a very thoughtful way and I think we need to recognize even with the reforms and changes we’re talking about, there’s no assurance that’s going to prevent some tragic incidents like these from happening in the future,” Branstad says.

“But we certainly need to do all we can and we need to make sure the public is also aware of mental health issues and that we’re able to reach out and help people that have problems so we can prevent tragedies as much as possible.” The top Republican in the legislature describes the state’s current mental health care system as a “patchwork quilt” that lacks uniformity.

The top Democrat in the legislature says helping ensure Iowans have access to mental health services “at the local level” is key.

On another topic, the governor says he’s had “several discussions” about a bill which would allow utilities to begin collecting money from customers to finance a possible nuclear power facility in the state. Governor Terry Branstad says he’s confident state regulators would have the ability to monitor the situation and protect rate-payers.

“I think there’s a critical need for us to look at how we can, in the future, meet the additional energy needs of the state of Iowa,” Branstad says. “And I think we should be open to considering things like clean coal and nuclear as well as natural gas and wind, and the other sources that we have.”

Critics say utility customers might see double-digit increases in their bills as MidAmerican examines the possibility of building a new nuclear power facility in Iowa, with no guarantee the facility would eventually be built. Branstad says the bill legislators draft should ensure the Iowa Utility Board has the direct “responsibility to regulate” the rate increases associated with a new nuclear power plant.

“Remember, this is a long, involved process. As I understand it, it would be eight or nine years (before the facility is built),” Branstad says. “But we do need to think ahead and as we work to revitalize the economy and bring more business and jobs here, we want to make sure that we have affordable…power available for our citizens and we want to do it in a way that also is environmentally safe as well.”

A.A.R.P. held a news conference this morning to denounce the bill pending in the legislature, saying it fails to protect utility customers from astronomical increases in their power bills.