Minnesota Congresswoman Michele Bachmann says her fellow Republicans missed an opportunity to block implementation of “ObamaCare” this past weekend.

Bachmann voted against the budget deal Republican House leaders struck with President Obama and Democrats in the Senate.

“We can’t win…if we don’t fight. That’s the bottom line…and people across the nation have told me since Friday how terribly disappointed they are in the final budget deal that we have because they expected so much more from us and so do I,” Bachmann said in Pella today. “And that’s why we have to remember: we will never win if we don’t fight.”

Bachmann delivered a speech at Pella Christian High School this afternoon, part of The Family Leader’s presidential lecture series. (Read live blog and listen to the speech.) She told the crowd of about 100 that Republicans in the U.S. House needed to use their “power of the purse” more effectively.

“We’re the ones who decide how the money gets spent,” Bachmann said, pounding the lectern to make her point.  “And Barack Obama gets no money, zero money unless we give it to him and so he can be held hostage and Harry Reid can be held hostage if we don’t give them money. We occupied a very powerful position in the House of Representatives and it was my belief that we could succeed in defunding…ObamaCare.”

During a question-and-answer session with reporters afterwards, Bachmann suggested federal budget negotiations will be even more difficult in the future once the government starts providing the health insurance subsidies outlined in the health care reform plan President Obama signed into law nearly a year ago. 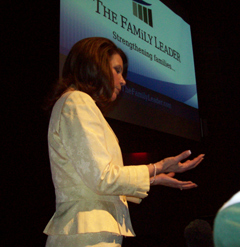 “We will have more budget battles in the future, but in those battles will we be willing to take on a government slow-down — ’cause government doesn’t shut down in a shut down; it slows down — so would we be willing to risk a slow-down if it means 30-50 million people would lose that subsidy?” Bachmann asked.

Bachmann, who has said she is considering a bid for the G.O.P.’s 2012 presidential nomination, began her speech in Pella by talking about her “born again” experience as a 16-year-old, saying that moment changed her whole world forever.