You are here: Home / Politics / Govt / Vote on redistricting plan may come Thursday 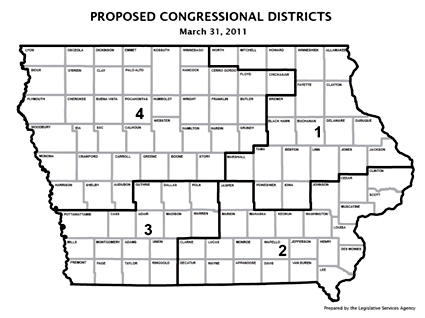 It appears the Iowa Legislature may vote this week on a plan that redraws the lines for Iowa’s congressional and legislative districts.

Over the past decade Iowa’s population did not grow as much as the population grew in some other states, so the state will go from five down to just four congressional districts in the 2012 election.  The plan, drawn up by staff in the non-partisan Legislative Services Agency, also outlines new boundaries for the 100 seats in the Iowa House and the 50 seats in the Iowa Senate.

House Speaker Kraig Paulsen, a Republican from Hiawatha, has studied the voting trends in each House district to try to gauge whether Republicans could win a majority of the races in 2012.

“As I look at the House map, I see a pathway to Republican control,” Paulsen said Friday on Iowa Public Television. “I can also see a pathway to Democrat control, so that tells me maybe there’s a heightened level of fairness.”

Senate Democratic Leader Mike Gronstal of Council Bluffs has made the same evaluation. “I’d actually say the opposite,” Gronstal said on IPTV. “We both kind of don’t like what we see, but don’t figure there’s a way to get a better map.”

According to Gronstal, that probably means it’s a “fair” redistricting plan.

“I don’t think that they were necessarily thrilled to be thrown together,” Paulsen told reporters Friday afternoon.  Gronstal, who was standing beside Paulsen, quickly quipped: “But the Realtors Association liked it.”

Loebsack has already indicated he’d move into the new second congressional district, where no incumbent congressman currently lives and Congressman Latham may be contemplating a move into the third district where Congressman Leonard Boswell now lives, setting up a General Election battle between Latham, a Republican, and Boswell, a Democrat.  Gronstal suggested the congressmen can see their own “pathways” for 2012.

“It may not be their ideal, but it’s a map they can live with,” Gronstal said.

A series of sparsely-attended public hearings were held last week around the state. The bipartisan Temporary Redistricting Commission which held those hearings is to present a report to legislators, perhaps later today.  Legislators then could vote on the plan as early as Thursday, April 14.