An Iowa National Guard soldier from a Shenandoah unit died Monday and three others were injured by a roadside bomb. Guard spokesman, Colonel Greg Hapgood, made the announcement during a news conference late Tuesday at guard headquarters at Camp Dodge.

Hapgood says 31-year-old Specialist Brent Maher of Honey Creek died when the M-RAP (Mine Resistant Ambush Protected) armored vehicle he was riding in was struck by an improvised explosive device. Maher was a member of the First Battalion, 168th Infantry Second Brigade Combat Team of the 34th Infantry Division in Shenandoah. 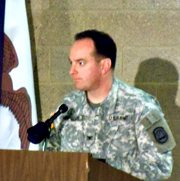 Colonel Greg Hapgood talks with the media about the death of Brent Maher.

The other injured soldiers are from the same unit and were identified as: 31-year-old Sergeant First Class Nicholas Jedlicka of Council Bluffs; 24-year-old Specialist Justin Christensen of Nebraska City, Nebraska and 20-year-old Specialist Dustin Morrison of New Market, Iowa. Hapgood did not have information on their conditions.

He says the soldiers were on a routine patrol and their vehicle was in a line of vehicles in what’s called a “mounted patrol.” “The improvised explosive device detonated underneath the vehicle itself,” Hapgood said, “to damage that vehicle and injure those soldiers and kill a soldier like it did, it was obviously a significant improvised explosive device that did that.” Hapgood says Maher was the gunner on the vehicle in its most vulnerable position on top.

He says the gunner is in a raised position out in the open and if the explosion is large enough to roll the vehicle, “you’re particularly at risk for significant injury.” Hapgood says Maher’s vehicle rolled once after the explosion. Hapgood says there are approximately 600 members in this unit and the death is a blow to them as well as the rest of the Iowa National Guard. 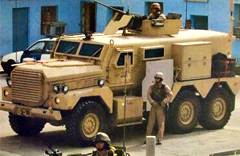 Iowa soldiers were in an MRAP or Mine-Resistant Ambush Protected like this while on patrol in Afghanistan.

“This is the first soldier that we have had killed during this particular operation, and losing one soldier is one to many,”Hapgood says. He says the soldiers will help each other as it is difficult to lose a buddy and have to go right back to work the next day, but that is what they will do.

Some 2,800 Iowa guard soldiers deployed to Afghanistan in November. Hapgood says Maher is the 20th Iowa Guard soldier to die in Iraq or Afghanistan since 2003.

Staff Sergeant Anthony Karr was is part of the unit and said he knew Maher well. 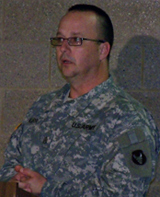 He says Maher liked to play and put a little excitement into the training. Karr says Maher loved his family and loved those he served with as they “called each other brother pretty much all of the time.” Maher was an 11-year military veteran who joined the Iowa National Guard in 2007 after earlier serving in the U-S Navy. He was born in Hamburg and graduated from Farrgut High School in 1998. Maher is survived by his wife Brenna, three daughters and one son.

Funeral arrangements for Maher are pending in Council Bluffs.

The family of Brent M. Maher issued the following statement:

“It is with great sadness that we learned of the death of our beloved husband and father, Brent Matthew Maher, during combat in Afghanistan. Brent died doing what he loved, serving his country and protecting the freedom that we enjoy and providing the people of Afghanistan with the opportunity for freedom.

We are proud of Brent’s accomplishments and those of his fellow Iowa National Guard Soldiers and all of the military serving our country. We are forever grateful to the United States military for providing Brent with the opportunities he has experienced for the past 11 years. Brent was making a difference in the lives of the Afghan people, and was proud of it. As shocked as we are by his death, we are deeply appreciative of the outpouring of support shown by his fellow Soldiers, his family, friends and the community during this difficult time.

We are sure that you can understand and will honor our request for family privacy at this time, as we are focused on working with military officials to return Brent’s body home for military services and burial. We thank you for your thoughts, prayers, and kindness at this extremely difficult time. We are deeply saddened by our loss, but extremely proud of the honorable way he served America as a leader in the U.S. Army. We will remember him, his sense of humor, his faith in God, and his love for his family, friends and his country, with great pride.”

(Photo of Maher and MRAP provided by the Iowa National Guard.)