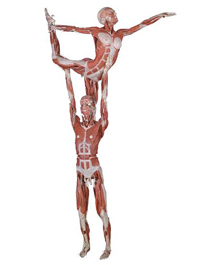 An exhibition featuring some 200 human specimens, from internal organs to complete bodies, will open at the Science Center of Iowa next month.

Paul Jennings, president and C.E.O. of the Des Moines-based facility, says the goal is to educate visitors about the inner workings of the human body and display how we can beat life-threatening diseases through sensible choices and changes in our lifestyles.

“The Body Worlds Vital exhibition has a particular focus on human health and well-being,” Jennings says. “The various exhibits that make up the exhibition present the human body in health, distress and disease. These are actually real human bodies in the exhibition.”

The bodies were willed by donors and were preserved using a process called plastination. Jennings saw the exhibit in California recently and was struck by one display that featured two sets of lungs. One set was healthy and pink while the other pair of lungs was riddled with grey and black splotches.

“I recall one of the cards that sat next to those two pieces and it said: ‘If you’re a smoker who smokes 20 cigarettes a day, you will put the equivalent of a cup of tar through your lungs on an annual basis,'” Jennings says. “It’s just a very powerful statement. We know that people do make lifestyle changes as a result of having gone through one of these exhibitions.”

While more than 32-million people have seen the various Body Worlds exhibitions that have toured the globe since 1995, this is only the second venue anywhere for the “Vital” version. Also, Des Moines is the smallest market in the U.S. to present this internationally-renowned educational series. Jennings says it’s fascinating to see how the human body functions and thinks it will inspire young Iowans to pursue careers in the bio-sciences field.

“This is a very thoughtful exhibition, very professionally done,” Jennings says. “We’re really hoping it will encourage a real dialogue and a discussion between the people who visit. That’s one of the areas where science centers are most effective.” He says it’s hoped the message of vitality, fitness and health will be contagious.

The recent Leonardo da Vinci exhibit drew 65,000 visitors to the Science Center during its winter run and Jennings predicts the Body Worlds Vital exhibit will prove an even-larger attraction.

It will open on May 7th and is expected to run through the summer. For more information, visit: “www.sciowa.org/bodyworldsvital“.