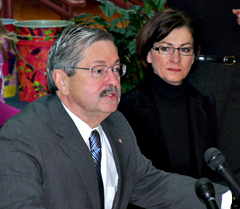 Governor Terry Branstad says he’ll sign the redistricting plan for Iowa’s legislative and congressional districts as soon as he gets an official copy of the bill.

The new maps were drafted by staff in the non-partisan Legislative Services Agency and only eight out of the 150 state legislators voted against the plan when it sailed through the House and Senate Thursday.

“Nothing is perfect, but I think they did a good job of keeping the variance between the districts…in terms of number of people very small,” Branstad says.

The plan maps out just four rather than five congressional districts, as Iowa is losing a seat in congress as a result of the 2010 Census.  Congressman Tom Latham, a Republican from Ames, announced this morning that he’s moving into the new third congressional district rather than remain in the new fourth district and face fellow Republican Congressman Steve King of Kiron in a primary in 2012.  It means Latham will instead challenge Democratic Congressman Leonard Boswell who lives in Des Moines, the largest city in the new third district.  Branstad says that race will be “real interesting.”

Branstad isn’t giving either the edge.  Branstad says Latham is well-known in central Iowa and he has run strong in Democratic leaning areas like Story County. “But don’t count out Leonard Boswell.  I mean, Boswell’s been up against tought competition every time. He’s a very formidable candidate,” Branstad says. “So I think you’re going to have two real strong candidates and I think it’ll be an interesting race.”

Congressman Dave Loebsack of Mount Vernon and Bruce Braley of Waterloo — both Democrats — both live in the new first congressional district, but Loebsack announced Thursday that he will move to the Iowa City area and seek reelection in the new second congressional district. “He’s going to move to Johnson County, into that new district where there’s not an incumbent,” Branstad says. “In fact, he kind of kiddingly told me he’s going to ask Congressman Braley to help him move.”  Branstad spoke by phone with all five congressmen this week to solicit their reactions to the plan.

Because the new district lines are drawn based on population distribution rather than partisan advantage, Branstad isn’t giving either party an edge in any of the four new districts.

“I think all four of the districts, frankly, are competitive,” Branstad says. “Now, obviously, in (Congressman) Steve King’s district, he has an advantage. I think the southwest Iowa district with Polk County is going to be very competitive — could go either way. The two districts in eastern Iowa tend to lean Democratic, but those were fairly close races last time and the numbers are such that I think they could be very competitive.”

Branstad made his comments during taping of the Iowa Public Television program “Iowa Press” which airs tonight at 7:30.