Iowa Congressman Tom Latham, a Republican from Ames says he will move into the new 3rd district and run for re-election in 2012. The redistricting plan would have had Latham facing fellow Republican Steve King in the new fourth district had he not decided to move.

Now Latham will face incumbent Democrat Leonard Boswell in the 3rd district. Boswell was the only current congressman not placed in a district with another incumbent under the new redistricting map.

The Iowa House and Senate approved the non-partisan plan for redrawing district lines Thursday and Governor Branstad said today he will sign it into law. 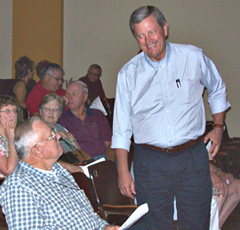