You are here: Home / Recreation / Entertainment / Dubuque native has key role in “Rock of Ages” 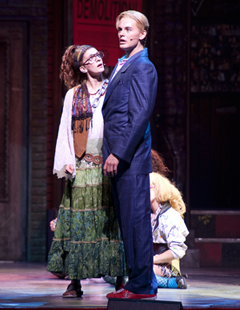 The acclaimed musical, “Rock of Ages,” makes its Iowa debut tonight — with an Iowa native in one of the key roles.

Twenty-six-year-old Travis Walker grew up in Dubuque and is a University of Northern Iowa graduate. Walker says he’s been touring the nation for eight months with this show and it’s a thrill to be bringing it to his home state, at last.

“It is cool, especially because it’s my first tour and my first big job so it’ll be nice to see my family and give them an opportunity to see the show,” Walker says. “I’m going back to UNI for a meet-and-greet and question-and-answer session with the undergrad theatre.” Walker now lives in Chicago and is the fifth of eight children in his family.

The “Rock of Ages” story is set in 1987 on the Sunset Strip in Los Angeles, as a small-town girl meets a big city rocker and they fall in love. The show’s been nominated for five Tony Awards. Walker plays the part of Franz and says he’s constantly buzzing around on stage.

“I have this ongoing thing that I’ve kind of based him off of a hummingbird,” Walker says. “I think I bring a really unique physicality to the role.” He says he considers himself an actor first, while he also sings and dances in this production. A movie version of “Rock of Ages” is already in the works with Tom Cruise reportedly signing on to play the lead role. Walker says he’s not sure what actor he’d cast for his role of Franz.

“I don’t really know how large of a role he’s going to have in the film, but it would be an opportunity for somebody to really stand out,” Walker says. “I think an unknown name might be an interesting choice.” Was he referring to an unknown Iowan perhaps? Walker laughed and said he’d welcome the call.

The show opens tonight at the Civic Center of Greater Des Moines and runs through Sunday. For details, visit: www.civiccenter.org.